Survey by RNC Pharma and Doktor Na Rabote (Doctor at Work): 92% of Doctors Report Decreasing Access to Medical Care due to COVID-19


52% of doctors say that access to medical care has worsened after the outbreak of the coronavirus epidemic, because anything not related to COVID-19 now works on the residual principle, according to an online survey by the RNC Pharma analyst company and the Doktor Na Rabote (Doctor at Work) social media service for doctors. Another 40% believe that the situation is close to critical, because doctors are overloaded, and many healthcare facilities are being re-profiled, while the retired capacities are not compensated in any way. It is mostly the doctors from Moscow and St. Petersburg who consider the situation critical. This correlates with the morbidity statistics, at the time of the survey Moscow accounted for more than 50% of all COVID-19 cases.

It is noteworthy that a serious deterioration is reported by 54% of female doctors and 46% of male doctors, and 46% of men and only 37% of women say that the situation is close to critical.

There are also optimists, although vert few. 6% of the respondents believe that nothing has fundamentally changed, except the load on certain specialties has increased. Another 1% noted an improvement in the situation. The first reason would be increased attention to healthcare. The second one is described by one of the respondents: “We mostly have to work with those who really need help. The number of those only capable of throwing tantrums has decreased significantly.”

How did the COVID-19 epidemic affect the availability of medical care for other diseases, in your opinion? (single-answer question) 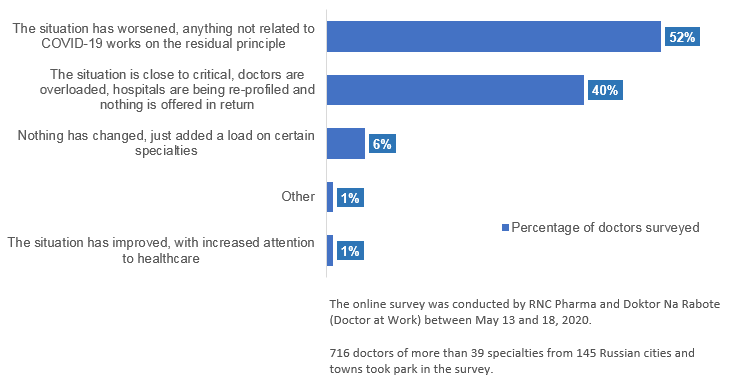