RNC Pharma Study: Features of the Commodity Circulation in the Commercial Pharmaceutical Market in Russia in 2020


At the first stage of the movement, more than 82% of all goods are shipped from distributors to the final destination, which is pharmacies, healthcare facilities and others. Pharmacies are, without a doubt, the main channel for the commercial market, accounting for more than 75% of the total volume of the first stage shipments. Another 5% are shipped to the warehouses of pharmacy chains, and then the goods are redistributed to specific points of sale by the pharmacy chain’s own logistics services.

However, this differs from region to region. In the Ural Federal District, nearly 90% of all goods are shipped directly to retail pharmacies, which is the highest share of direct shipments to pharmacies. At the same time, pharmacy chains’ own warehouse infrastructure is relatively poorly developed and underutilized here; only 1% of drug supplies are supplied to the warehouses of pharmacy chains. The Volga Federal District has the lowest share of direct shipments to pharmacies – a little more than 60%, while the warehouses of pharmacy chains receive 12%. This can be explained by the work format of such chains as Implozia and Vita in Samara, as well as Planeta Zdorovo and Apteka Timer in Perm.

The other destinations are not of serious importance for the business of large wholesale companies on a federal scale. Deliveries to commercial healthcare facilities, as well as state healthcare facilities at the expense of the facility’s own funds, account for about 1.2% of the shipments. The category “others” include shipments to charitable foundations, insurance companies, ministries and departments, military units, etc. The share of such shipments is very small due to the fact that wholesale companies specialize in the pharmaceutical market but for the public sector, it is other companies, which, with rare exceptions, practically do not work with retailers.

Around 18% go to the secondary sales channel. The resale continues, with 11% of the goods going from the secondary distributor to tertiary distributors. While there can be quite a lot of similar stages of pharmaceutical drug resale, the share of secondary sales decreases sharply at the third stage. (In particular, in 2020 secondary sales accounted for about 2%.) Further stages of the movement of goods are insignificant, because either they involve the transfer of goods from region to region, or the goods are uncommon products with low rates of market penetration. It is unlikely that this activity can be considered commercial, since the wholesale mark-ups at stages two or three falls to the limits acceptable for the market participants.

Diagrams of commodity circulation of wholesale shipments in the commercial pharmaceutical market in 2020, by type of recipients 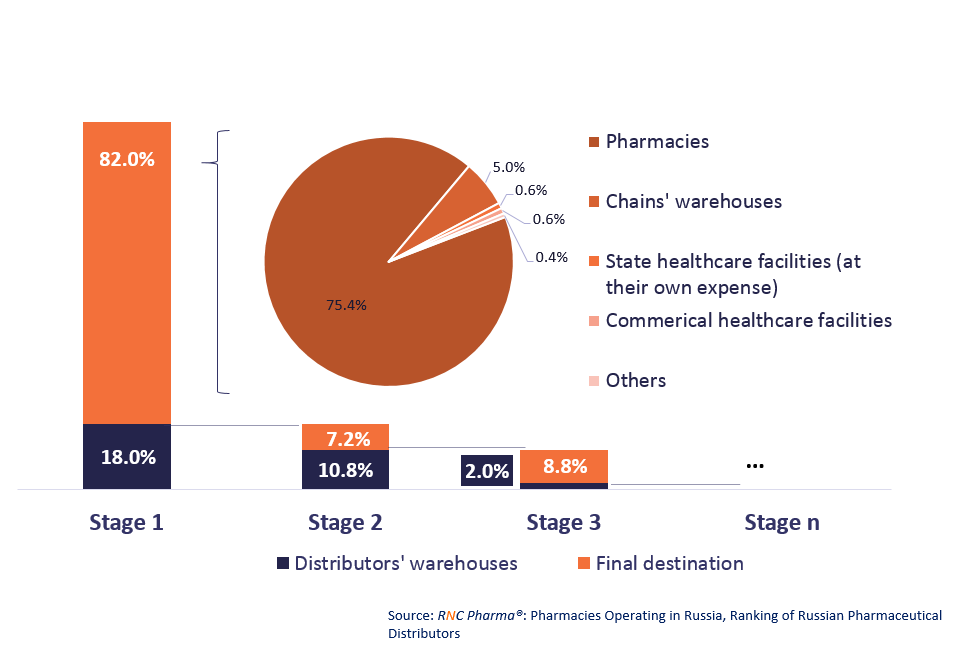