Survey by RNC Pharma and Medvestnik: 75% of Russian Doctors Say that Abolition of Internships has Led to Low-Quality Training


The vast majority of the doctors (75.3%) who took part in a survey conducted by the RNC Pharma analyst company and the platform for doctors Medvestnik believe that the abolition of internships has led to an abrupt decline in the quality of training that medical students receive. They are supportive of the National Medical Chamber and their initiatives to return the postgraduate medical programs of specialization. However, this answer had statistically significant differences between the two age groups of the study participants. It was chosen by 78% of those aged 46 and older, and by 69% of those aged 23 to 45.

Another 14.8% of the doctors believe that bringing back the internship program would not change much, since the problem, in their opinion, is that medical education itself is of low quality, and therefore it is the education that needs to be reformed. Notably, this answer option was more popular among the younger audience (23–45 years old). Another 3.7% of the respondents said that residency could also include training. Finally, the least popular answer (3.2%) was: “I doubt that the initiative will be approved, since it will make the situation with the staffing shortage even worse.”

We also received surprisingly diverse answers from those who chose to give their own answer. While most respondents still advocated the return of the internship program, there were other points of view. In particular, one of the experts wrote: “Residency is definitely better because you don’t need to make recent graduates run errands for their supervisors, and that is what happened during internship. That type of training did not provide for a real interest in clinical cases, and practicing doctors did not have time for the graduates—they had enough worries of their own.”

Do you support the National Medical Chamber’s initiative to bring back the internship program in medical schools? (single-answer question) 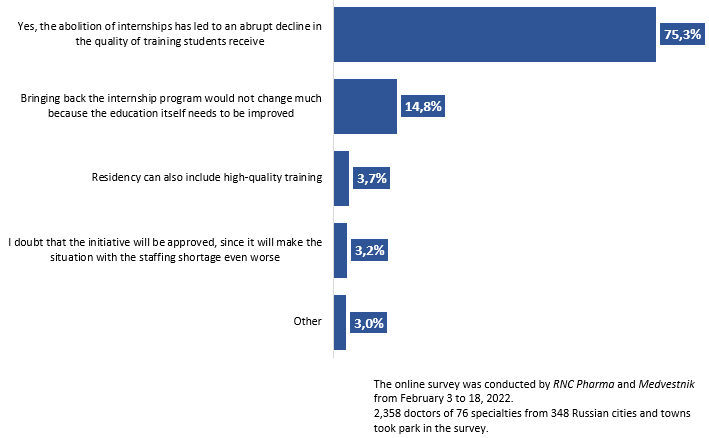