In July 2019, Russia imported 61.5 bln RUB worth of ready-made pharmaceuticals (free circulation prices, VAT included), which is in monetary terms (rubles) +31.5% higher than that of July 2018 and the highest volume since August 2010. Higher dynamics were witnessed in June 2016. However, the dynamics in physical terms are only +7.3%, with the import volume of 183.3 bln units.

Among the top 20 companies with the highest import volume in monetary terms for the period, BMS has the highest dynamics, with a 3.5 times import. The company’s import amounts to over 5 bln RUB, with Opdivo accounting for over 70% of the import. The import of Opdivo has risen by 3.8 times in monetary terms, which is still not record-worthy, since the import of BMS’ Yervoy has risen by 8.3 times. BMS us followed by Astellas, with a 2 times increase. The import of a number of drugs has risen, in particular of Eligard (3.7 times increase) and Xtandi (2.1 times increase). Astellas also halted in-bulk imports of Flemoxin Solutab, Advagraf, Wilprafen and others, which was substituted by ready-made drug import.

As for in-bulk importers, the leaders are very few. Among the top 20 companies, Novartis has the highest dynamics, with a 4.7 times increase. The company has been in-bulk importing 7 trademarks since January, with Tafinlar and Jaakafi accounting for the highest percent of the import. Astellas is followed by Eisai, with a 2.4 times increase. Eisai has been importing only two trademarks, antitumor Halaven and Lenvima. Both drugs are packaged at the facilities of Pharmastandard in Ufa.

Dynamics of import of pharmaceuticals, including homeopathic and seawater drugs, to Russia, free circulation prices including customs clearance and VAT, RUB (January 2018 – July 2019) 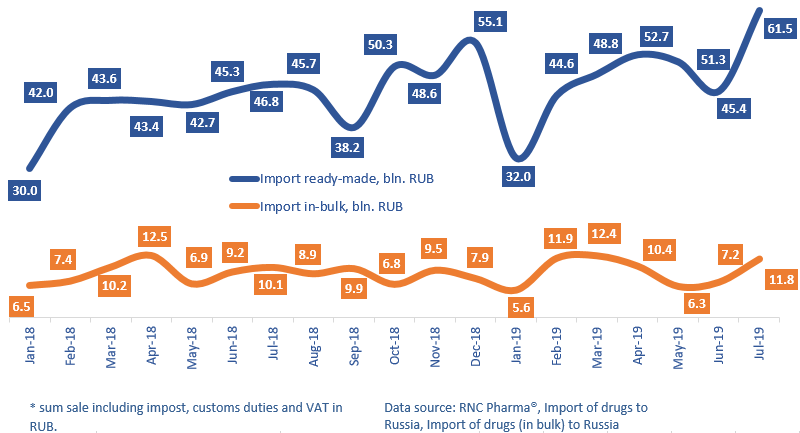