Between January and June 2019, Russia imported 319.8 thousand units, 8.2 bln RUB worth of pharmaceuticals for clinical trials (CT) (free circulation prices), which is in physical terms (units) 15.8% lower and in monetary terms (rubles) 1.4% lower than that of the same period in 2018. While the negative dynamics in physical terms have been registered at least thrice since 2013, the negative dynamics in monetary terms have been registered for the first time.

Despite the negative dynamics, the import line keeps expanding. Between January and June 2019, Russia imported 447 trademarks against 419 in 2018. However, apart from analyzed products, Russia imports reference products. In June 2019, placebo products accounted for 40.8% of the CT import, while in June 2018, they accounted for 41.4% (and 39% as of December 39%).

Pemafibrate (K-877) by Kova Group (USA) is the leader in physical terms. Back in January, Russia imported 6,912 units of Pemafibrate, and the record has not been broken yet. Paclitaxel is the leader among reference products with 8,830 units. It was imported in three different dosage forms by 9 different importers for 16 clinical trials.

In Q2 2019, Russia started importing as many as 40 new pharmaceuticals for CT that had not been imported since 2013. KD035 (human IgG1 monoclonal antibodies targeting HVEGFR2) is the leader in physical terms among them with 1,100 units. The drug was imported from China for Nativa affiliated Russian company Onkon. At the moment, it is undergoing phase 1 trials (at the premises of Medsi clinic) to assess its safety and tolerability and determine the maximum tolerated dose in patients with solid tumors. KD035 is followed by Tislelizumab (BGB-A317), in April and June Russia imported 590 units of it. However, these 590 units also include placebos, since the drug is currently undergoing phase 3 trials to asses its effectiveness and safety in combination with chemotherapeutic in patients with esophageal cancer. The trials began in April 2019 at the premises of 9 medical organizations. 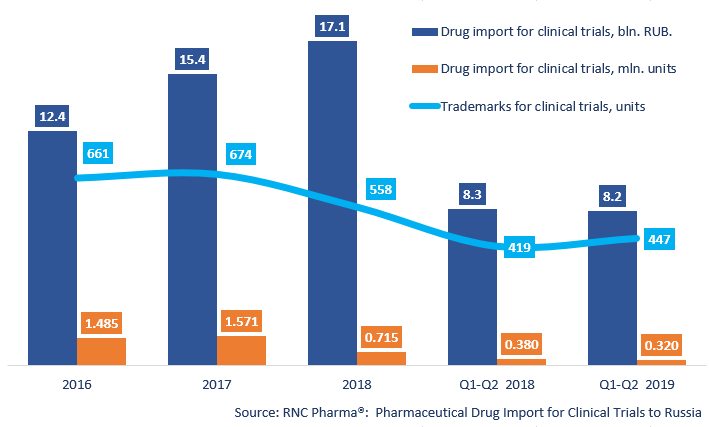