According to a survey conducted by the RNC Pharma analyst company and the Medvestnik platform for doctors, 88% of Russian doctors do not think that the current obligatory medical insurance (OMI) plans cover the actual expenses, with their opinions varying slightly on how much the plans do cover. For example, one-third of the respondents (32.7%) believe that the plans cover at best 50%. The second most popular opinion (25.6%) was “from 50 to 60%.”

Another 19.6% of the physicians said the place could cover “from 70 to 80%”—the most popular answer option among those that can be classified as “optimistic.” 5.7% and 4.3% of the respondents answered “from 80 to 90%” and “from 90 to 100%”, respectively. Interestingly, mostly men voted for “from 90 to 100%.” Yet, there were no statistically significant differences in terms of geography, although physicians working in smaller towns, with the population of less than 100,000 (Buzuluk of Orenburg Oblast, Kirovo-Chepetsk of Kirov Oblast, etc.), tended to be more optimistic in their answers.

Only 1.1% of the study participants believed that the current plans “completely” covered the costs, and “even more than required.”

In your opinion, how much of the expenses in your hospital do the average obligatory medical insurance plans cover? (single-answer question) 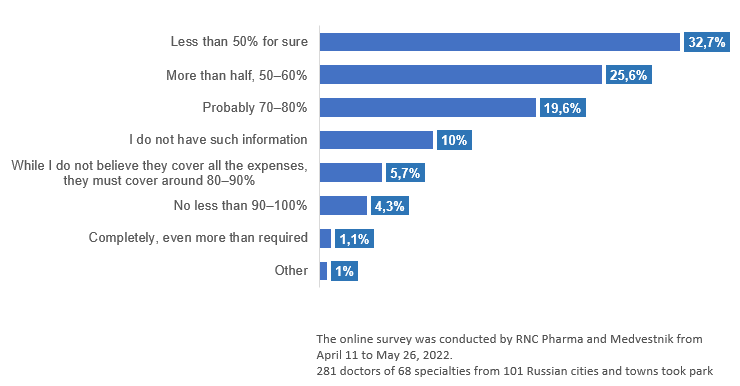