For the Russian pharmaceutical market, 2020 seems to be the year of hype and defect. Both of these phenomena are absolute evil for all market participants, with distributors being no exception. However, wholesalers are obviously those of the few participants in the distribution system who can at least try to turn the situation to their advantage. Their opportunities here are quite extensive, ranging from demanding prepayment to imposing products that are not in demand, etc. This approach, well tested in the last years of the Soviet economy, found application in the new market realities, although it was mostly local in nature.

Despite the crisis in many aspects, the strategic development of wholesalers also continued. R-Pharm is one of the most prominent examples here: the company has become the proud owner of the TEVA enterprise in Yaroslavl, which is a serious start in the development of their own production. In addition, Sberbank does not abandon its attempts to sell the pledged Rosta plant in St. Petersburg, as well as the Rosta storage facilities in Novosibirsk; in early 2021, they were put up for sale once again. However, despite the direct connection with the pharmaceutical market, the new owners of these assets may be far from the industry, which will lead to subsequent re-profiling.

But that is not quite true for another object that Sberbank is trying to sell. In February 2021, the media obtained information about negotiations concerning the sale of the Erkapharm pharmacy chain, with representatives of a credit institution participating in the talks. This organization is the second biggest player in the Russian retail market, and large retail distribution companies that do not have significant assets in the pharmaceutical retail can be potential stakeholders here. Such a deal could seriously change the balance of power in the top distribution companies, especially since the tactics of development for wholesalers focused on the retail market are unlikely to produce high dividends this year. Neither the macroeconomic situation nor the regulatory activity is conducive to this. 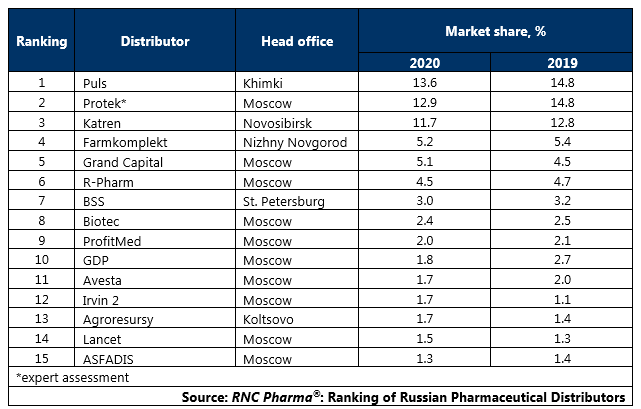