The October dynamics in monetary terms were only +0.7%, which is the first positive dynamics in three months, but the seasonal surge in demand could have been higher. The weather anomalies are the ones to blame once again, just like last spring, and the peak demand turned out to be vague. In addition to the climate factor, there has been an increase in the incidence of COVID-19 since September in Russia, which leads to significant changes of consumer priorities. Another factor is the falling incomes of the population, which also limits possible increases in the demand.

While the above-mentioned trends are true for most Russian consumers, there are certain regional differences, mostly attributed to the climate than economy. Only four out of the eight federal districts have positive dynamics in monetary terms for the period between January and October 2020. The Southern and the Far Eastern Federal Districts had the highest dynamics (+8.3% and +8%, respectively). It is noteworthy that the dynamics of both districts, despite being nearly identical, was fundamentally different in nature: a significant increase in veterinary drug consumption in physical terms for the Southern FD (more than +10%) and changes in the products and prices for the Far East FD.

Among the sales in the Southern FD, Pchelodar by Agrobioprom has the highest dynamics (sales grown by 3.2 times in monetary and by 3.7 times in physical terms). Insectoacaricides Pchelodar Binakar and combined antihelminthics Pchelodar Fenpraz and Fenpraz Forte contributed to the dynamics the most. The Nobivac vaccines by MSD have the lowest dynamics in the region, but the sales of Nobivac L4, vaccine for the prevention of leptospirosis in dogs, has increased by nearly 30 times.

The sales of Synulox antibacterials by Zoetis in the Far East FD have increased by 46% in monetary and by 43% in physical terms (the tablets contributed to the dynamics the most). The sales of Sex Barrier by Astrapharm have the lowest dynamics due to the sales of its alternative, Countersex NEO by Astrapharm, having increased. 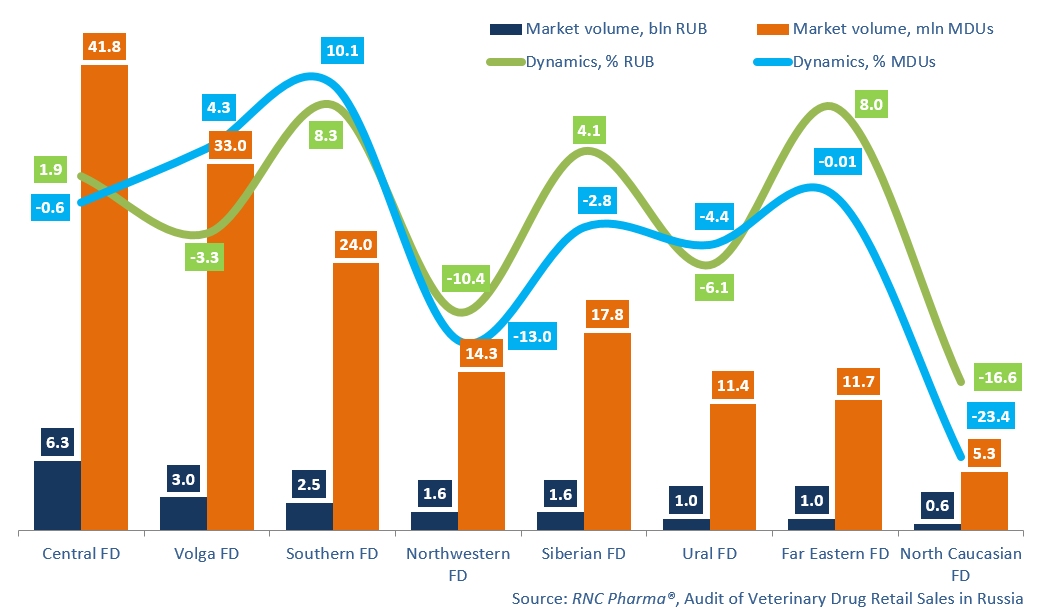