Between January and September 2020, the stagnating sales of veterinary drugs in the retail market amounted to RUB 15.97 bln (retail prices, VAT included), which is in monetary terms (rubles) 0.3% lower than in 2019. The volume in physical terms is 144.4 bln minimum dosage units (MDU), which is 0.3% higher than in 2019.

Temperature anomalies strongly influenced the consumption trends in the spring; in fact, the heat came a month earlier than usual, which led to an earlier surge in demand for seasonal medicines. At the same time, this fall has also brought a surprise; September turned out to be almost summer warm in most parts of Russia. The weather affected the consumption trends once again; the demand for certain drug groups increased significantly. In particular, the following groups showed record-worthy dynamics in physical terms at the end of September 2020: anthelmintics (excluding combined drugs), immunosuppressive agents (mainly antipruritic Apoquel), cardiotonics, antispasmodics, NSAIDs, as well as certain groups of antibacterials (semi-synthetic penicillin+beta-lactamase inhibitor, tetracycline and others). Interestingly, that did not lead to a significant increase in sales volume in monetary terms at the end of the month, with the dynamics of +23.3% in physical and -1.4% in monetary terms.

It was mostly the sales of drugs in the lower price segment that were growing since consumers had clearly switched to cheaper products in a number of groups. In particular, the demand dropped significantly for combined anthelmintic drugs: Milbemax by Elanco, Prazicid by Apicenna and others, and increased for mono-drugs: Alben and Fascocide by Agrovetzashchita.

GiGi (Latvia) and Vetoquinol (France) have the highest dynamics among the top 15 foreign manufacturers with the largest sales volume for the period between January and September 2020. Cardiotonic for dogs PimoPet and anthelmintic MilbePet contributed to the former company’s dynamics of +40%. Drug for kidney failure Ipakitine and combined drug for otodectosis Oridermyl contributed to the dynamics of Vetoquinol (+34%). 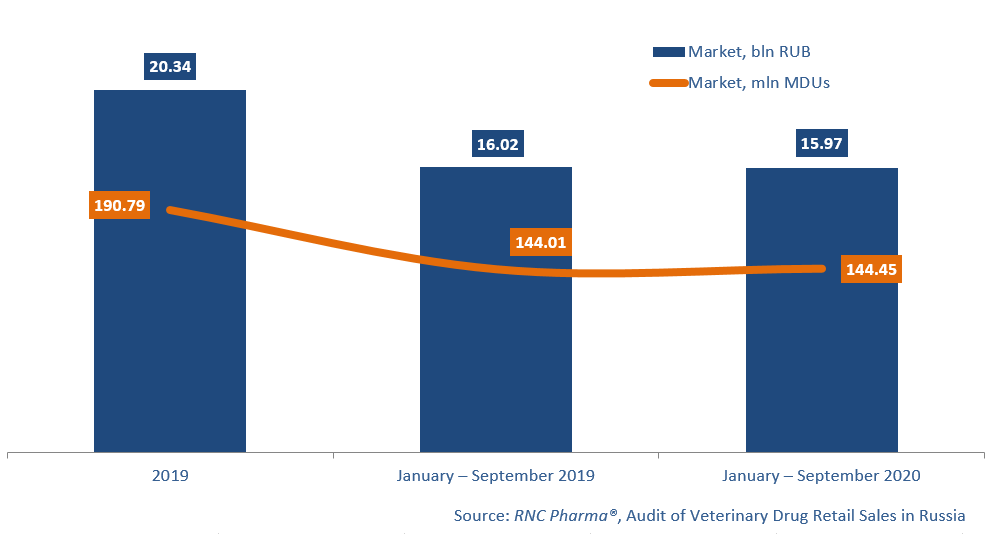