Between January and April 2020, the sales of veterinary drugs in the retail market amounted to 6.9 bln RUB (retail prices, VAT included), with the dynamics in monetary terms (rubles) of +0.6%. In comparison with the Q1 dynamics (+20.4%), the dynamics in April seem twice as modest. If calculated in minimum dosage units (MDU), the market volume is 65 bln MDUs, with the dynamics of +2.8%.

From region to region, the Russian retail market of veterinary drugs has pronounced structural differences. One of them is the percentage of drugs sold to end consumers in the form of fractional packages. The largest regional market in terms of monetary volume is the Central Federal District (CFD), the region accounted for 5.7 billion RUB, or almost 38% of the total market from May 2019 to April 2020. At the same time, the drugs sold in smaller consumer packages account for only 26.3% of the total CFD market in monetary terms. The maximum percentage of smaller consumer packages was recorded in the Northwestern and Southern Federal Districts (64.6% and 53.8%, respectively). In terms of the monetary volume of the market, the regions are in 4th and 3rd places.

The Northwestern and South Federal Districts are ones of the biggest regional markets in terms of average prices for veterinary drugs. One MDU in the Northwestern FD is 106 RUB and 101 rubles in the South FD. The most expensive MDU is obviously found in the CFD (136 RUB). The cheapest drugs are sold in the Siberian Federal District, only 74 RUB per MDU.

The types of drugs also vary greatly from region to region, and some differences are already visible even at the level of certain pharmaceutical groups. Insecto-acaricides and anthelmintics are the most sold drugs in monetary terms from May 2019 to April 2020 in nearly all regions, the only exception being the Far Eastern Federal District, where a group of vaccines has been the most sold preparation over the past 12 months, closely followed by anthelmintic drugs.

As for trademarks, Bravecto by MSD is the most sold drug in monetary terms in seven regions. Milbemax by Elanco is in the 2nd place in the CFD, Bars by Agrovetzashchita in Volga FD, Southern FD, and Ural FD, and Nobivac by MSD in the Southwestern FD, Northern FD, and North Caucasian FD. The Far Eastern FD is, however, fundamentally different from the rest of the country, since the most sold veterinary drugs here are Russian-made ones: Bars by Agrovetzashchita and Ivermec by Nita-Farm.

Fig. Volume and structure of Russian retail markets of veterinary drugs (May 2019 – April 2020) 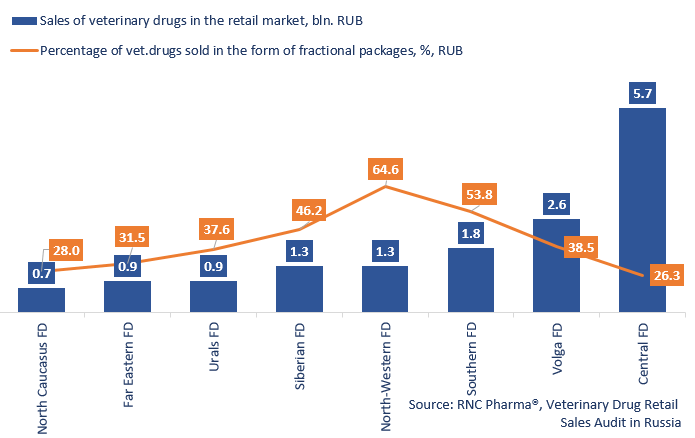