Pharmaceutical Drug Production in Russia in 2020


In 2020, Russian manufacturers produced RUB 534.3 bln worth of pharmaceutical drugs (manufacturer’s prices, VAT included), which is in monetary terms (rubles) 25.6% higher than in 2019. The positive growth rates have been maintained for the second year in a row; it was +26.6% last year. The production volume in physical terms (units) amounts to 4.87 bln units, with the growth rate of +4.3%. If calculated in minimum dosage units (MDU), the growth rate is remarkably higher (+5.9%) and the production volume is 81.9 bln MDUs.

The overall growth rates were determined by the active work of the pharmaceutical industry in December. In just one month, domestic companies produced an all-time high RUB 79.3 bln worth of pharmaceuticals. To be fair, we should note that this is the third absolute record set by Russian pharmaceutical companies last year, the other two were the November (RUB 51.4 bln) and April results (RUB 48.1 bln). However, December is also notable for the record-worthy growth rates of +91.5% in monetary terms; a more or less comparable result was recorded for the last time back in September 2012 with +80%. Interestingly, the growth rates in physical terms were, to put it mildly, far from spectacular (-14% in units and -29% in MDUs).

Just like last year, the growth rates in physical terms also varied depending on the drug category: -1.2% for OTC drugs and +11.4% for Rx drugs.

Out of 314 Rx drug manufacturers in 2020, nine have more than tenfold growth in production. Advanced Group (Belgorod Region) has the highest growth rates, increasing its manufacture by 183 times. That was obviously due to a low base effect: the production started back in 2017, but the volumes were very small, limited to several thousand packages of the antituberculosis drug Sodium Para-Aminosalicylate. In 2020, the company expanded its product line with two drugs, and one of them, Lamivudine, contributed to the growth rates. Two companies producing radiopharmaceuticals are also worth mentioning. It is the Federal Center Nuclear Medicine Projects Design and Development, which increased its production by 21 times, manufacturing Sodium Iodide, 131-I and 123-I, used for therapeutic and diagnostic purposes. The other company is Karpov Scientific Research Institute of Physics and Chemistry, subordinate to Rosatom. In 2020, its production grew by 13 times. The company was manufacturing three drugs: radioactive iodine (Sodium Iodide, 131-I and Sodium O-Iodo-Hippurate, 131-I) and Samarium, 153Sm Oxabifor. Only two companies manufacturing OTC drugs out of 161 have tenfold growth rates. Vest (former Iodine Technologies and Marketing) increased its production by 16.7 times, producing Ammonia, Hydrogen Peroxide, Chlorhexidine, etc. Rafarma (Protec Group) produced only Ibuprofen suppositories and increased its production by 10.1 times. 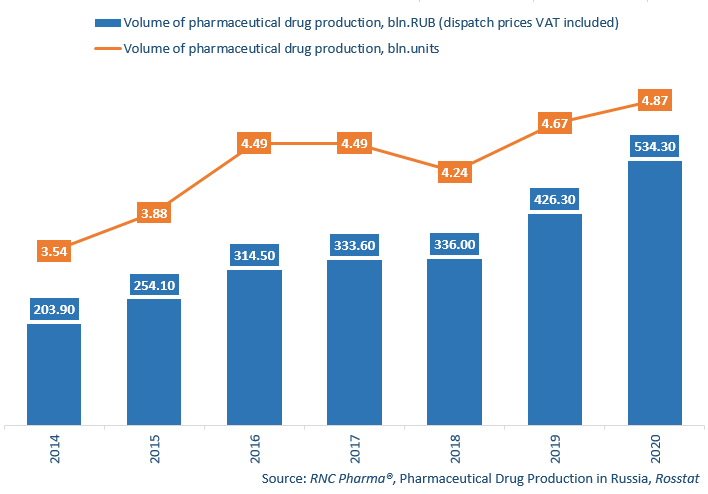