35% of doctors believe that the main cause of medical errors are “excessive workloads”, followed by “failures of the healthcare system”, according to an online survey by the RNC Pharma analyst company and the Doktor Na Rabote (Doctor at Work) social media service for doctors. However, excessive workloads are also a direct result of the improper organization of the healthcare system.

Another type of reasons concerns medical training, but they are not as significant. Only 11% of the doctors believe that a "low level of education" is the cause of medical errors. Another 6% of the respondents said that there is lack of sufficient experience, which can steam from the problems of the education system. However, it is obvious that if the treatment process is properly organized, this factor will be a minor issue, in the least.

The system of responsibility for medical errors (6%) could be another cause. Doctors often find themselves in the place of the accused due to the opinion leader’s conclusion, which can be not only wrong, but also dictated by market considerations. In addition, the doctor in the role of the accused is deprived of the opportunity to publicly uphold their point of view, in contrast to the injured party.

The doctors also spoke about the significance of every listed reason and a high possibility of atypical forms of diseases occurring.

What is the main cause of medical errors in Russia, in your opinion? (single answer question) 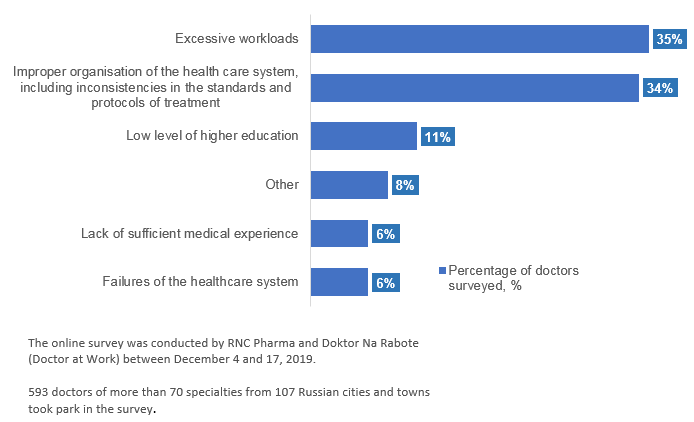