Between January and August 2020, the sales of veterinary drugs in the retail market amounted to RUB 14.3 bln (retail prices, VAT included), which is in monetary terms (rubles) hardly a hundredth of a percent higher than in 2019. The volume in physical terms is 125.1 bln minimum dosage units (MDU), which is 1.7% lower than in 2019. These unimpressive results are mostly due to low demand in August 2020, when the volume of consumption dropped by 6.3% in monetary and by 6.7% in physical terms.

Despite the low demand, summer 2020 did not deviate from the seasonal trends much: the spring peak was followed by a calm period, which was replaced by another peak between August and September. The drop in consumption is largely due to the consequences of the coronavirus epidemic. Since the borders for most traditional tourist destinations were closed, domestic tourism skyrocketed in August. Before the start of the school year, Russians were trying to catch up on what they missed during self-isolation, so that consumption priorities shifted from the veterinary market. These trends resulted in a noticeable change in the competitive environment, with Russian companies losing first place in the sales volume in monetary terms between January and August 2020 to American companies. While the sales of the former have dropped by 3%, those of the latter have increased by 8%.

Zoetis has the best sales dynamics among the American companies (+19% in monetary terms). Their vaccine for dogs Vanguard (sales grown by 4 times), insectoacaricide Simparica (+58%) and antipruritic Apoquel (+45%) contributed to the dynamics the most. Zoetis is followed by MSD (+8%) with their Bravecto (+16%) and porcine insulin preparation Caninsulin (+21%).

Agrobioprom has the highest dynamics among the Russian companies (+49%), with their Pchelodar line products, in particular, insectoacaricides Pchelodar Binakar, contributing to the dynamics. Ekoprom/Neoterica also has good dynamics (+8%). The sales of their antiparasitic products Neoterica Protecto have increased by 500 times. However, the products were launched as recently as in August 2019, which speaks of the low base effect. 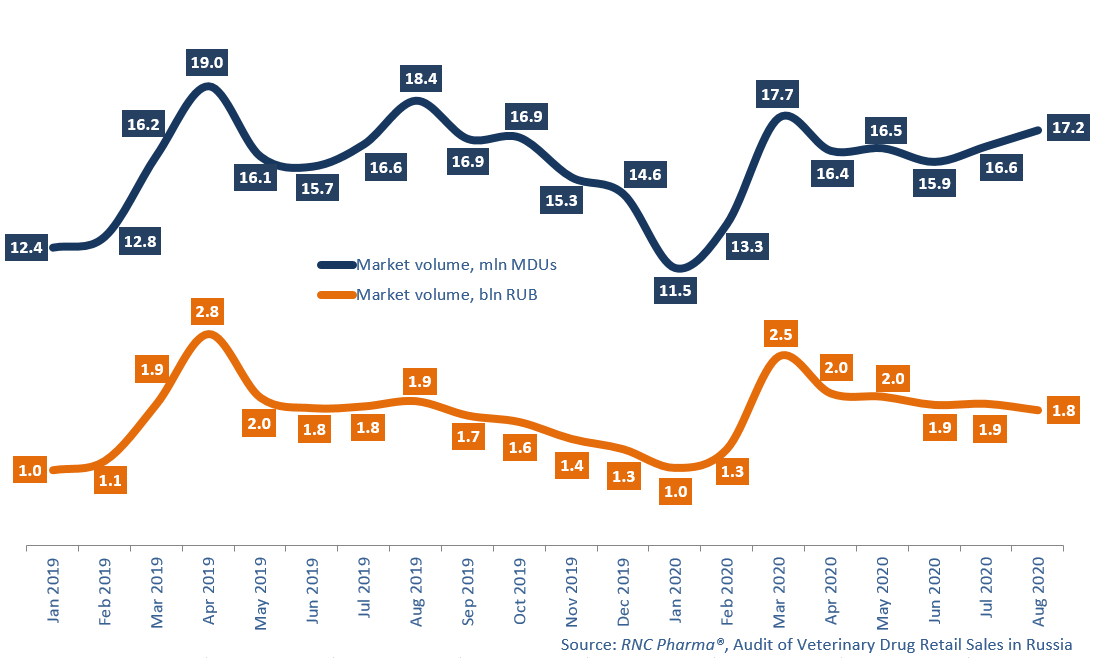