One of the anti-crisis measures prepared by the Government of the Russian Federation is the possibility to exempt from customs duties a number of “vital goods” imported into Russia, which may include pharmaceutical drugs and APIs. Customs duties, as part of the customs clearance procedure, are the main expense item of foreign economic activity participants. In 2021, for example, the importers of ready-made drugs paid RUB 18.5 billion in total. The importers of in-bulk drugs paid RUB 2.5 billion, while the importers of APIs made payments in the amount of around RUB 2 billion. The customs duty for most of the imported ready-made drugs (71% of the total import in monetary terms) and around 53% of the in-bulk drugs is 3%. As for APIs, 74% enjoy a zero rate, and thus only the importers of the remaining 26% have to pay the duties. The maximum rate for pharmaceutical drugs is 12%, applied to 0.2% of the total import volume; in particular, vitamins and vitamin and mineral combinations. The maximum rate for APIs (6.5%) applies only to 0.5% of the import, mainly bacterial lysates and bile.

The rates have remained virtually the same for several years, with the last significant change occurring in 2017, when the duty on ready-made seawater preparations was decreased from 8.2% to 6.5%. The volume of payments increased compared to 2020 exclusively due to the growth in the total import volume. Ready-made drugs had the most noticeable growth rate, due to the general failure in imports in 2020, since importers had stocked up at the end of 2019.

Despite those significant amounts, the duties do not play an important role in the total value of imported products. For example, they accounted for 2.4% of the import value of ready-made drugs in 2021, for 1.5% of in-bulk drugs, and for only about 1% of APIs. If the duties are lifted, that will definitely not have any significant impact on the end-use price, because the measure seems to be intended to stimulate the growth of the import volume for a certain period of time to manage possible disruptions in logistics. Moreover, it would not be entirely fair to domestic manufacturers, since the benefit for importers of ready-made and in-bulk drugs will be nearly 11 times as great.

In order to have any significant impact on the prices in the market, the VAT should be lifted, since only 2% of the total import of ready-made drugs, 0.2% of in-bulk drugs and around 0.7% of APIs enjoy benefits. The total amount of VAT payments in 2021 was RUB 70.8 billion, RUB 15.3 billion and RUB 19.4 billion, respectively, which accounts for 9–9.7% of the total import value.

Total volume of customs duties paid by importers of ready-made and in-bulk drugs and APIs to Russia, 2017–2021, billion RUB 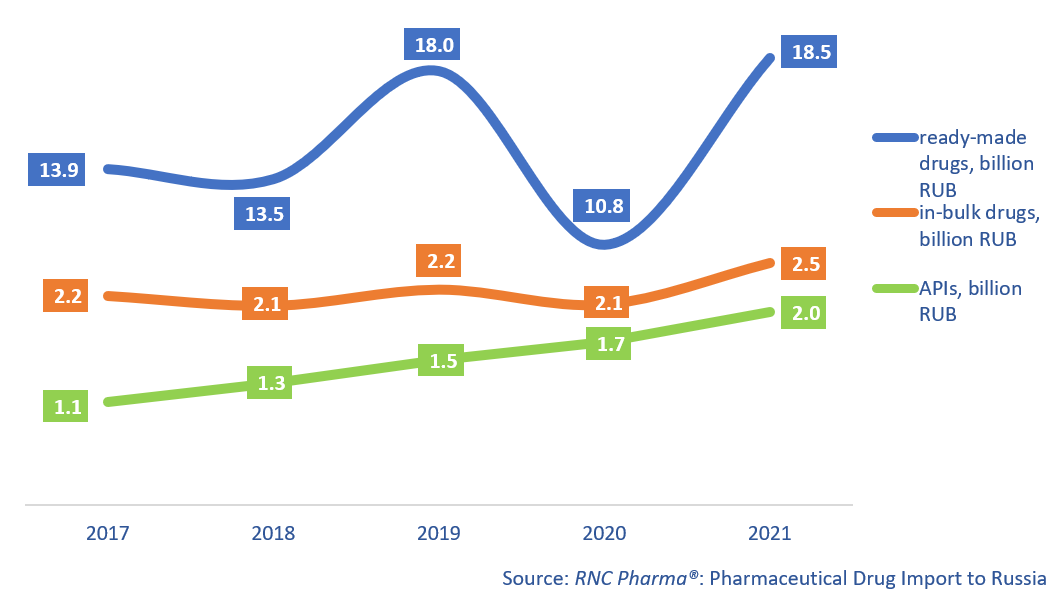