The Laspeyres price index for the import of APIs to Russia in 2020 reached an all-time high of 23.9%. Over the past 10 years, a more or less comparable index was witnessed back in 2015 (19.9%), when the increase in prices was caused by the devaluation of the Russian ruble, with the US dollar increasing by almost 60% and the euro by about 33% against the ruble.

The US dollar was used for most of the API import transactions in 2015, with the dollar accounting for 86.3% of the import, followed by the euro (6.9%), and then the ruble (4.8%). The proportion of ruble transactions had stayed nearly the same until 2014, when the contract currency of a number of the contracts was changed to the ruble, against the backdrop of the devaluation of the ruble. The foreign pharmaceutical manufacturers that had localized their production in Russia were first, and then other companies joined. Over the past 5 years, the situation has significantly changed, with the ruble accounting for 15.8% of the transactions in 2020. While the proportion of dollar contracts has been steadily falling, the dollar accounted for as much as 69.4% of the transactions in 2020.

The new waves of devaluation in spring and fall 2020 were sure to affect the prices of APIs imported to Russia. Apart from macroeconomic ones, other factors influenced the price development, in particular the general shortage of APIs due to the COVID-19 pandemic and the pricing policies of Chinese manufacturers, who have been increasing their prices for several years now because of a great number of enterprises could not comply with the new environmental laws and had to close. The Chinese pricing policies have been affecting the API import prices for nearly three years in a row.

There have been examples of deflation over the past 10 years as well. The prices went down in 2012–2013 and in 2016–2017, and the retracement was relatively modest and could not prevent significant price increases in other periods. The cumulative inflation rate for the import of APIs in 2020 reached 59%.

Unfortunately, the all-time high Laspeyres price index for APIs, against the backdrop of the Russian pharmaceutical industry almost wholly depending on imports, could lead not only to increased prices on the Russian market. Because of the price regulation for VED and impossible price indexation, the production of certain types of drugs is stopping. At the same time, the regulators of the Russian pharmaceutical market simply do not have any effective methods of monitoring and control of such risks; the problem is at best tracked after the deficit has arisen, followed by an administrative procedure of price revision. However, this approach cannot be considered effective globally, especially with the surging production costs. 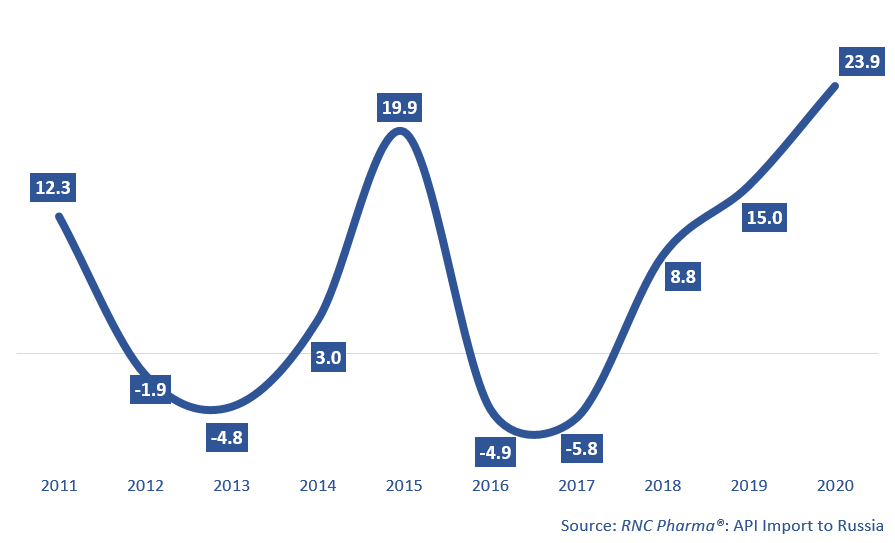