Survey by RNC Pharma and Doktor Na Rabote (Doctor at Work): at least 35% of Doctors in Contact with COVID Patients will not Receive Incentive Payments due to Formal Reasons


1,579 respondents from more than 200 cities and towns in Russia took part in an online survey conducted from May 26 to June 9, 2020 by the RNC Pharma analyst company and the Doktor Na Rabote (Doctor at Work) social media service for doctors. The aim of the survey was to measure the impact of the COVID-19 epidemic in Russia on the actual level of income of doctors, namely the impact of the federal and regional incentive payments for medical staff that provide care to patients with the coronavirus infection. 71% of the respondents are involved in the provision of medical care to patients with COVID-19, and 29% are not (Fig. 1).

Fig. 1. Are you involved in the provision of medical care to patients with COVID-19? (single-answer question) 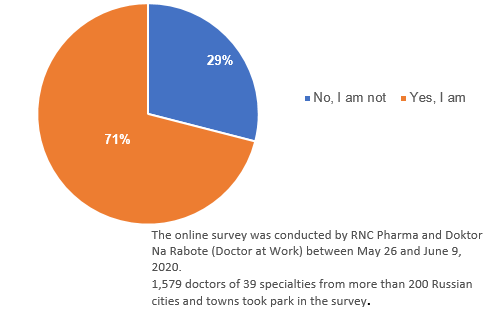 Only 11% of the respondents who are involved said that they had been receiving all the required incentive payments in full (Fig. 2). Another 19% of the doctors began to receive payments after Vladimir Putin severely criticized the calculation procedure and the delay in payments at a meeting on May 15, 2020.

However, another 20% said that the situation had not changed even after the meeting. The management of their health facility often explains delays by the need for calculations, asking the doctors to wait. Some doctors even complained about threats from the management, in particular, one of the doctors described the situation as follows: “We received the payments for April on May 21, but only after a complaint. Then we got a number of calls with threats from the hospital management. They promised to dismiss everyone who wrote the complaint after the end of the pandemic.”

Perhaps the main problem noted by 35% of the respondents is the refusal of payments for formal reasons. For example, if the specialty of the doctor is not included in the corresponding directives. In particular, many doctors are perplexed at the lack of federal payments to general practitioners, many of whom provide care to COVID patients staying at home, while the amount of regional payments is significantly “less than that for ambulance drivers” who transport patients to hospitals.

At the same time, justice will always triumph among doctors. One of the respondents wrote in the “Other” section, “After some of us got the payments, we divide them between the whole team”.

Fig. 2. Have you received the incentive payments ordered by the President of the Russian Federation? (single-answer question) 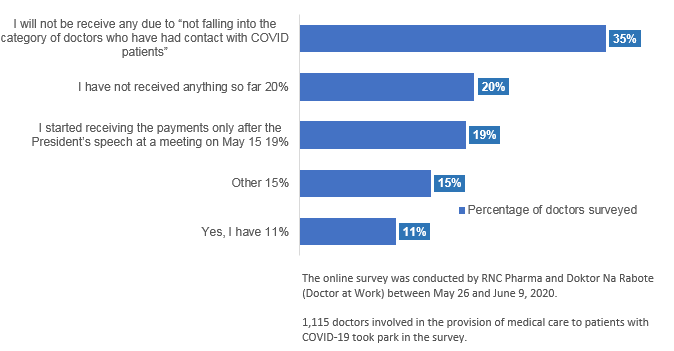 As for doctors who have not had contact with COVID patients, 52% of the respondents noted that their income had decreased due to the epidemic (Fig. 3). The reasons are plenty; in some cases, doctors receive only a salary, without additional payments and bonuses, for example, due to the cancellation of the medical examination, etc. Another 11% of the respondents say that they are not paid anything at all, in particular, because of having been sent on unpaid leave, which is a widespread practice. Some respondents said that they had received payments during the first month, but then were asked to write a vacation application “at their own expense.” For some doctors, their rate of pay was reduced, especially if they had been working for only a couple of months.

At the same time, about 30% of the doctors said that their income level had not changed. Finally, only 2% of doctors spoke about an increase in income.

Fig. 3. How has your income changed since the start of the COVID-19 epidemic in Russia? (single-answer question) 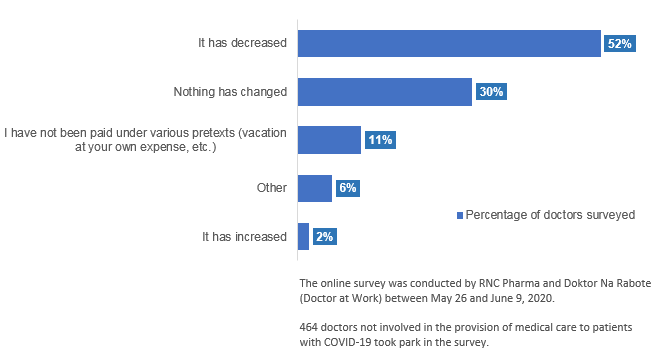