In 2019, Russia imported 18.4 bln RUB worth (customs clearance prices, VAT included) of pharmaceutical drugs for clinical trials (CT), or 862 thousand units. While the dynamics in monetary terms have reached a historic high and are +7.6%, the dynamics in physical terms are much higher (+19.4%) but at the same time nearly thrice lower than those in 2014.

Pimavanserin (ACP-103, Nuplazid) by Acadia Pharmaceuticals is the leader in the import in physical terms with 54.9 thousand units. Large-scale testing in Russia began in 2017, although it had been imported in small batches between 2014 and 2015. Currently, several studies are simultaneously being conducted, and two of them were launched in 2019. These are randomized double-blind placebo-controlled trials of the 3rd phase to assess the efficacy and safety of the drug in the treatment of schizophrenia (Advance-2 and Enhance-2). More than 250 patients are involved in trials.

Beginning Q4 of 2019, Russia has been importing 45 new (not imported since 2013) pharmaceutical drugs for CT. DE-130A by Santen accounts for the biggest import volume in physical terms with 4,400 units. The ophthalmic drug is a combination of Latanoprost and Novosorb, and is currently in the middle of a multicenter, randomized phase 3 trial, which compares the safety and efficacy of DE-130A and Xalatan in patients with open-angle glaucoma or ocular hypertension. 110 patients in 11 hospitals are participating in the study.

DE-130A is followed by Nuwiq (Octapharma) with 2,800 units. Nuwiq was registered in Russia in 2016 and is currently being imported as part of the study of the pharmacokinetic and coagulation activity of the FVIII-PEGLi (SelectAid) preparation by Assistance Healthcare Development in patients with severe hemophilia A. The study involving 21 patients started on October 14, 2019 in 6 medical organizations. The import volume of SelectAid during the period amounted to 832 units, and another 1,664 units were imported in January 2020. 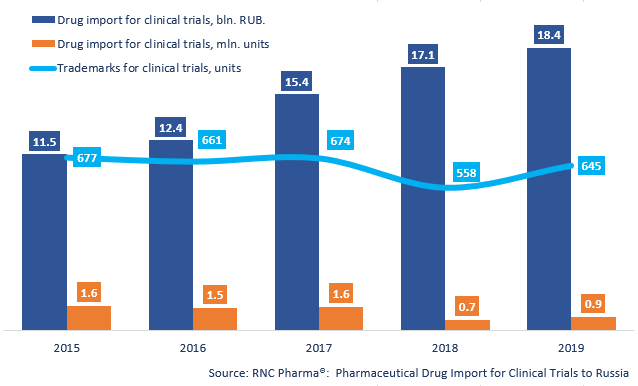