Import of Veterinary Drugs and Feed Supplements to Russia (August 2020)


Between January and August 2020, Russia imported RUB 20.9 bln worth of veterinary drugs (customs clearance and VAT included), which is in monetary terms (rubles) 4% higher than in 2019. The import volume of feed supplements amounted to RUB 27.2 mln, with the dynamics of +14%.

Due to the active work of importers in May and June 2020, the dynamics of the import of veterinary drugs in monetary terms were +27% and +43%. After a noticeable decline in July, the dynamics were negative for two months straight. In particular, the dynamics in August were -1%. The dynamics of the feed supplement import were much more stable. However, the two-digit dynamics from March to July 2020 plummeted to -18.4% in August 2020.

The dynamics of the veterinary drug import for the period between January and August 2020 are -11% in physical terms, even though the average number of dosages in a unit has increased. If calculated in minimum dosage units (MDU), the dynamics are -33.6%. As for feed supplements, the dynamics are +12.7%.

Daesung Microbiological Labs (South Korea) has the highest import dynamics among the top 30 manufacturers of veterinary drugs; the company’s imports have grown by 6.9 times. This year, it has been importing two veterinary drugs to Russia, with porcine circovirus vaccine Circo PigVac contributing to the dynamics the most. The South Korean company is followed by Zhejiang Dayang Biotech Group Co., Ltd. (China), which has increased its imports to Russia by 6.6 times, while importing antibacterials Enduro and NKP. Dopharma (Netherlands) is also worth mentioning since the company’s imports have increased by 5.5 times. Fenoxipen, penicillin antibiotic for livestock, contributed to the dynamics the most.

CJ Selecta (Brazil) has the best dynamics among the largest manufacturers of feed supplements. Despite importing only one product to Russia – soy protein concentrate X-SOY 600. Ajinomoto Group (France) comes second, having increased its imports by 9.4 times. Beside L-Lysine Hydrochloride 99% Feed Grade, which accounted for most of the imports, the company imports other aminoacids to Russia: L-Tryptophan and L-Valine. 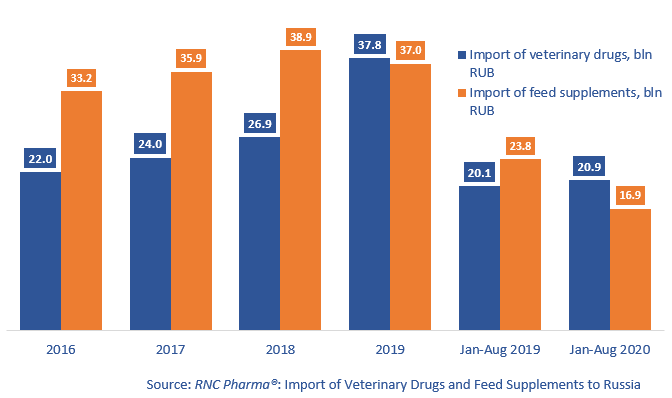