Last year’s growth rates of the Russian pharmaceutical retail market were in line with the inflation rate. While the price index was rather impressive, in the current conditions only maintaining more or less stable figures in the market seems possible, rather than development, because in fact, the market is stagnating. Besides, even those figures were mainly the result of the growing purchasing activity in the online segment, which is still developing, primarily by luring away consumers from offline pharmacies.

That is true as far as pharmaceutical drugs are concerned, but the success of certain online players in relation to parapharma is much more obvious. In addition, the market is coming close to the introduction of dietary supplement labeling, with the experimental period ending in August 2022. The actual launch is unlikely to happen earlier than in 2023 and without losses for the pharmaceutical retail market. The losses might concern both the market assortment and the demand levels. The industry is also waiting for the start of a pilot project that will allow the online sale of Rx drugs, which can seriously change the more or less established online segment.

In this regard, the need to expand the list of products allowed for sale in pharmacies is naturally growing. Some market participants, due to having realized that this process can drag on for an indefinite period, are starting to experiment with different formats. For example, Protek has opened cosmetics stores, Rigla Beauty. The competition in this sphere may not be significantly lower, but it is still possible to try to attract their loyal customers, however hard that might be. Besides, this does not mean it will directly affect the revenue of the parent company, since the company will have to cooperate with specialized distributors.

The public sector has been developing much more actively, with the growth rates in 2021 almost 4 times as high as those in the retail. While this certainly will attract wholesalers specializing in retail, there are also limitations. First, the possibilities of most retail companies to develop in the public sector are limited due to the way the logistics work processes are organized. Second, a rather limited set of products contributed to the growth rates: in addition to the coronavirus vaccines, those were drugs for SMA, certain types of antitumor drugs, and a set of drugs recommended for COVID-19 treatment, such as anticoagulants, immunosuppressants, and antivirals. However, specific wholesalers were assigned to provide those drugs, in some cases also acting as industrial partners of the product license owners. That means no one would be willing to work with “strangers” in this segment as well.

Finally, the regulators have also boosted their activity in the medical device market. Apart from the new rules for lotting, which has significantly increased the number of tender procedures, there is a high chance that price regulation tools will be introduced, just like with VED drugs. So far, the issue has been raised mainly in relation to the increase in prices for PCR and rapid tests, and does not affect pharmaceutical distributors. However, it is unlikely that the tools will be limited to those categories. In addition, February 2022 marked the formal start of the experiment on labeling medical devices. Hopefully, the full-scale implementation of the system will avoid the same mistakes made during the implementation of the Drug Movement Monitoring system, but it is naturally impossible avoid any consequences for the market. 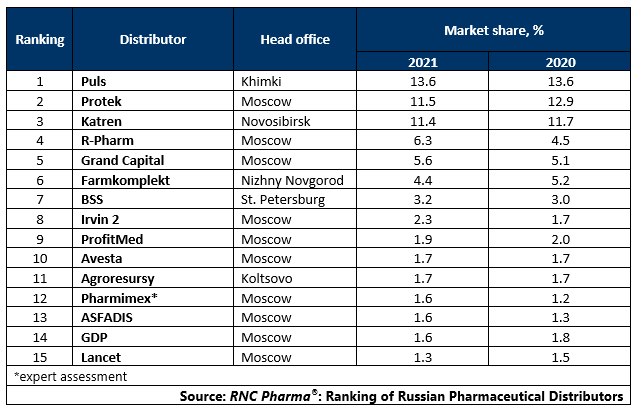