Pharmaceutical Drug Import to Russia (May 2022)

In May 2022, however, only one group had negative growth rates. The import of ready-made drugs increased 17.7% in rubles, while the import of bulk drugs decreased 30%. The negative trend for bulk drugs was most likely due to the active growth of imports back in April, when the growth rate in rubles was nearly 79%. Yet, the imports grew in monetary terms mainly due to the inflation factor. In physical terms, both groups suffered negative growth rates: –17% for ready-made drugs (in packages) and –30% for bulk drugs (in MDUs). We detect a similar pattern for the second month in a row.

Israel had the best growth rates of the import of ready-made drugs in physical terms in January–May 2022—the country increased its imports 12.3 times against January–May 2021, while importing mainly products manufactured there. Israel is followed by Turkey (2.3 times), which served as a transit country and imported drugs manufactured mostly in India. India has been actively searching for opportunities to import through third countries; in addition to Turkey, India has increased imports through Finland, but is still unable to compensate for the drop in direct imports. Indian manufacturers of ready-made drugs were the ones mostly affected by the sanctions on Russia, losing nearly 2.5 billion rubles in the first 5 months of 2022.

Vertex Pharmaceuticals had the highest growth rates among the top importers of ready-made drugs in monetary terms (37.8 times), followed by Biogen (5.1 times). Drugs for the treatment of cystic fibrosis, Trikafta and Orkambi, helped the growth rates of Vertex Pharmaceuticals, although Trikafta is yet to be registered in Russia. Biogen increased its imports of Spinraza, a drug for SMA, and Plegridy, a drug for multiple sclerosis. 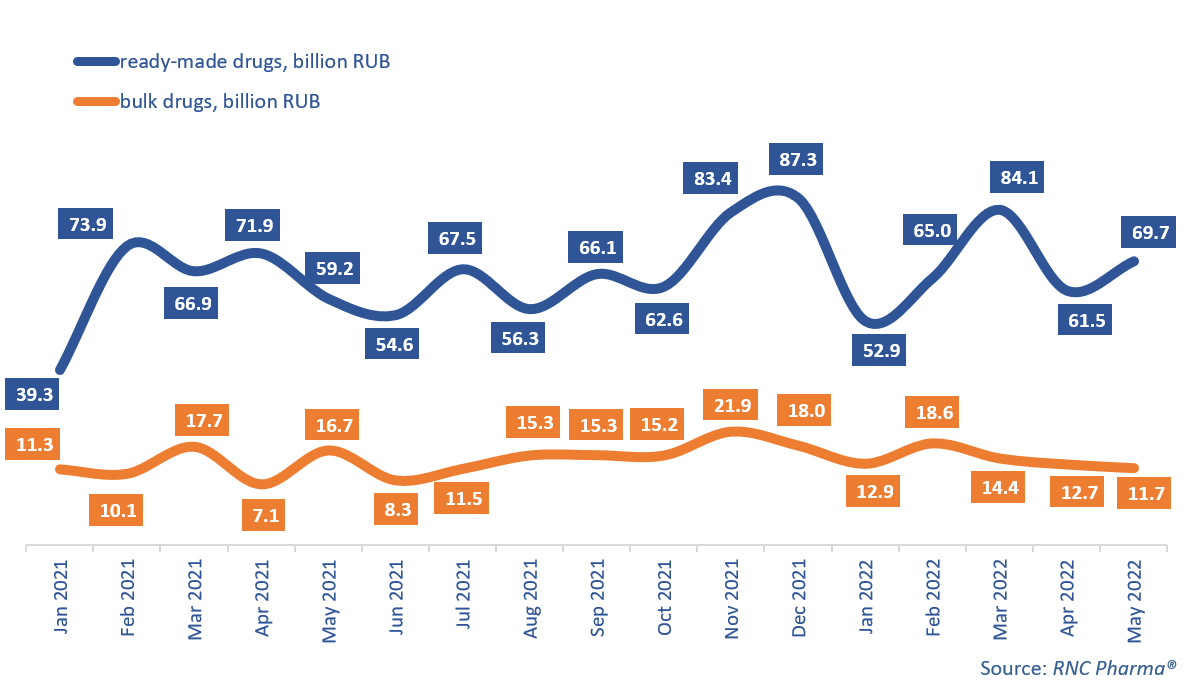