For the Russian pharmaceutical retail, the first months of 2019 were highlighted by a significant growth of the market volume in monetary terms (+6.1% in rubles) against last year’s stagnation. The high dynamics are mostly due to a surge in influenza and ARVI incidence, with the epidemiological season being rather atypical both in terms and incidence rates. The pharmaceutical inflation rates, which reached 5.6% from January to March, also contributed to the dynamics. At the same time, incomes of the population for the period have fallen by an impressive 2.3%. Russians began to actively save money, which this is not just a hypothesis; the trends of “savings behavior” are confirmed by the surveys of such organizations as VTsIOM (Russian Public Opinion Research Center) and research holding Romir.

Regulatory activity only adds up to these rather unfavorable conditions. In March 2019, the State Duma initiative group lead by Andrei Isayev issued a document containing a number of initiatives to regulate the pharmaceutical wholesale and retail. Nearly each of them, if implemented, is more or less sure to lead to a collapse in the Russian pharmaceutical market. The proposals are so absurd though that it leaves some hope that they will not turn even into draft regulations. It would be wrong not to mention the long-awaited project regulating pharmaceutical remote trade. It got lost in the State Duma in 2017, but in May 2019 it suddenly received several edits, including an unrealistic requirement that couriers have pharmaceutical or medical education.

However, the active development of non-pharmaceutical retail business did not stop, but underwent a fairly significant transformation, in particular, the most prominent non-pharmaceutical company X5 Retail Group reached an agreement to open pharmacies with members of the Iris alliance, and in a very original way. Later, the news of a similar partnership with the Interregional Retail Pharmaceutical Company (MRFK) became public. Until the end of 2025, the companies plan to open around 1,400 pharmacies in Pyatyorochka stores. Apparently, exclusive relations with Mega Pharm are no longer necessary, and the retailer began to hedge risks. Magnit also actively moves toward its goal, as of April 1, 2019, it had around 123 working (stocking up) pharmacies, and by the end of June, this number will significantly increase. 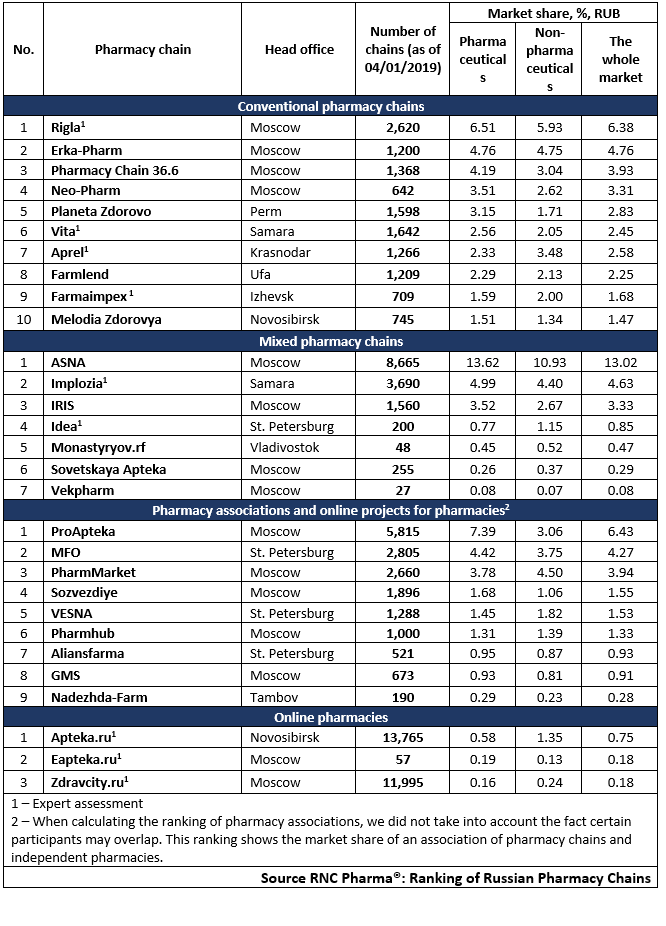