Despite the relatively modest results of the Russian pharmaceutical market in 2018, most large and medium-sized Russian wholesalers did not have anything to complain about. A number of distributors showed significant development dynamics. The so-called “second echelon” companies showed nearly exceptional results, with several companies having double-digit dispatch growth rates.

However, the situation may change. The absolute majority of large manufacturing companies is undergoing a total reform of the pharmacy chain departments, with not only personnel rotation (job search sites are full of vacancies), but also work order change. In particular, a number of these companies made the approved distributors lists. While pharmacy chains are still allowed to work with a distributor outside the list, the manufacturer will not pay for the promotion. Considering that the majority of pharmacy chains no longer work with the front margin, it will be easier to cooperate with the approved distributors.

Nonetheless, it is impossible to imagine that the market will no longer have to deal with the situations when the promotion of the same consignment of goods was paid for by the manufacturer several times in different pharmacy chains. Only a full-fledged and open marking system, ready to be launched next year, is able to eradicate that. But the main direction is clear, and the number of players in the wholesale market are sure to decline due to these measures in the very near future. The current pharmacy chain concentration process, in which multi-regional and even federal players are participating, will also contribute to that. 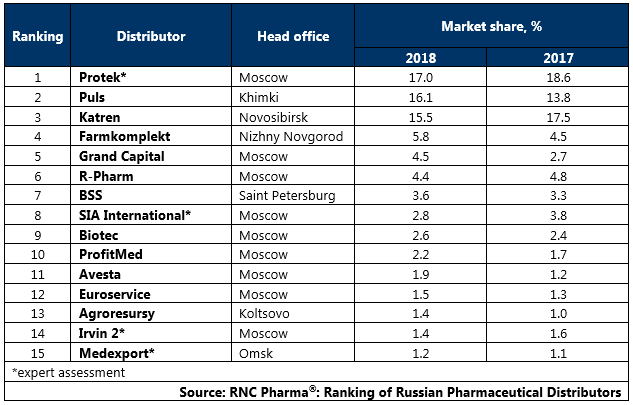