In 2019, Russia manufactured 425.3 bln RUB worth of pharmaceutical drugs (manufacturers’ dispatch prices, VAT included), which is in monetary terms (rubles) 26.6% higher than that in 2018. The results are the highest since the financial crisis between 2015 and 2016. The dynamics in physical terms are +7.4% in units and +6.4% in minimum dosage units (MDU), with 4.5 bln units of ready-made pharmaceuticals, or 75 bln MDUs.

That can be explained by the localization processes of a number of drugs, both the high-cost ones, also purchased within the High-Cost Nosologies program, and those of the middle price segment and mass demand. There was also uncertainty faced by enterprises due to the planned launch of the labelling system starting January 1, 2020. Many were not ready, so they sought to build up inventories. It was already clear in November that the launch date would likely to be postponed, but became certain only in early December 2019, which resulted in pharmaceutical companies actively building up their inventories between September and December.

As for OTC drugs, it is mostly manufacturers of traditional drugs that have high dynamics, including Ivanovo Pharmaceutical Plant with +88% and Samaramedprom with +41%. 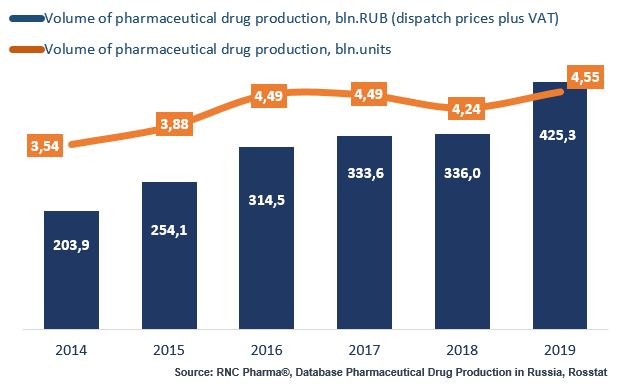