The number of factors influencing the Russian pharmaceutical market may have reached a historic high this year, which is why partial mobilization was hardly surprising. The way it affected the Russian economy is worth describing as vividly as possible. First, a significant part of consumers was lost, including not only the mobilized conscripts, but also those “tourists” who fled Russia to its neighboring states, with solvent consumers among them. Second, for a relatively short period of time, the pharmaceutical market saw a “militarization” of demand, which included the need to provide conscripts with drugs and medical devices used in warfare, as well as general panic moods stimulating the demand for certain drugs.

This rush can hardly compare to that in March this year, especially since falling household incomes limited the possibilities—disposable personal incomes decreased 3.4% in Q3, according to Rosstat, but that clearly does not reflect the full impact of mobilization, which started in late September. That is why the period turned out to be rather calm for wholesalers and other market participants, especially since the relations with suppliers got back to normal, despite the fact that the Russian divisions of certain foreign manufacturers transformed. There were no global problems with liquidity.

Apart from the obvious impact on demand, the current economic and political events had other consequences. For example, the pharmaceutical market saw a number of deals between retail and wholesale players—Yevgeny Nifantyev transferring the rights to Neo-Pharm to an open-end fund, the sale of the Farmiya chain, Aleksei Repik leaving R-Pharm, Vladimir Nesterenko selling his GDP distributor, etc. Not every listed M&A event can probably be called a deal: one was a departure from daily management, another was an attempt to protect the business from potential sanctions, or the company completing changes to its operating activities. However, it seems indisputable that a significant part of these events was provoked by the crisis, and they will lead to certain consequences for the system of relations in the pharmaceutical market. For example, certain distributors acting as Farmiya’s creditors are now alarmed at the possibility of recovering debts from the former owner of the company.

The future development of the new Russian regions, including the work of the pharmaceutical infrastructure, remains an open question. Full-scale work in those territories is out of the question for the time being, since a wide swath of the regions is involved in the special military operation. In addition, the future activities will have to be integrated into the laws of the Russian Federation. While activities in those territories are now associated with a large number of risks, and modern Russia has not had such experience yet, the pioneers can surely expect the most advantageous positions in the future. Interestingly, at least two major Russian distributors have experience of working in Ukraine, but this was part of a completely different historical reality. 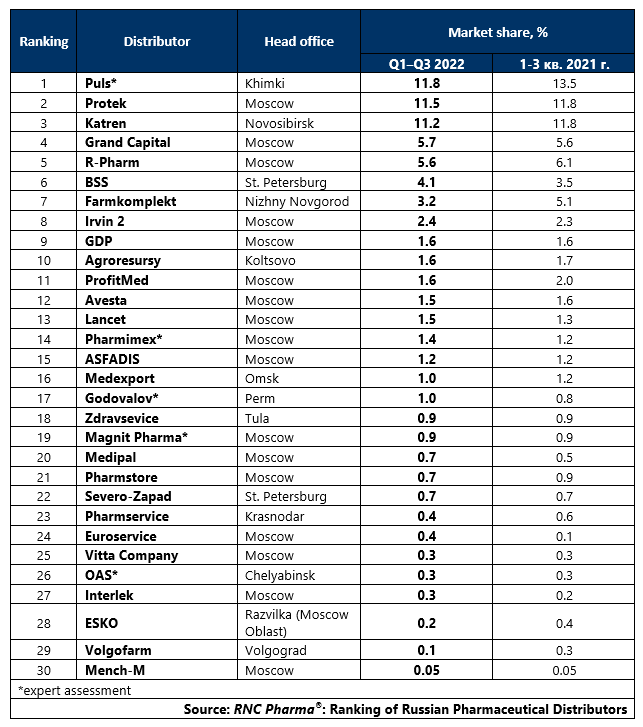