Between January and October 2020, Russia imported RUB 134.1 bln worth of APIs (customs clearance and VAT included), which is in monetary terms (rubles) 20% higher than in 2019. The import volume in physical terms (tons) amounted to 12.1 thousand tons, with the growth rate of +12%.

The importers’ activity in October 2020 did not have any significant effect on the growth rates for the period between January and October. The growth rates were only +5.6% in monetary terms and -4% in physical. However, even those growth rates do not look that bad against the August results (-27% and -24% in monetary and physical terms, respectively).

Dolutegravir Sodium was the most imported API in monetary terms in October 2020. The import volume amounted to RUB 1.6 bln. The company GSK was importing it from Japan for the production of Tivicay at the facilities of Servier Rus at the so-called New Moscow. Pneumococcal Polysaccharide Conjugates, imported by Petrovax, comes second. Petrovax is a local partner of Pfizer in the production of the ready-made form of Prevenar.

Among the APIs imported in October 2020, Guaifenesin was the only one that had not been imported before (Biocom imported 25 kg for RUB 100,000). As for the period between January and October 2020, the number of the “new” APIs are as many as 79, among which commercial API Favipiravir accounted for the largest import volume. Russia started importing Favipiravir in April 2020, and the volume has since then reached RUB 1.2 bln and 4.4 tons, 90% of which has been imported from China, the rest from India. The API has been imported by 4 companies, with Drug Technology (R-Pharm group) accounting for 70% of the import. 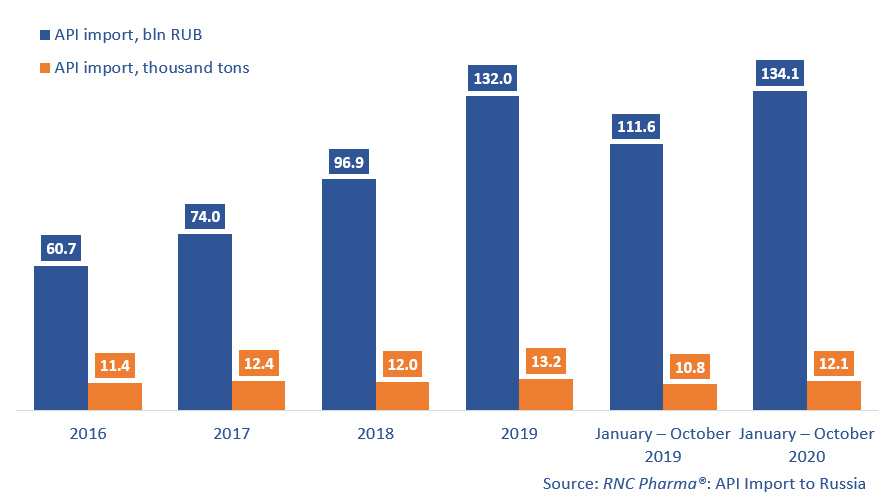