Between January and September 2020, Russia imported RUB 18.3 bln worth of pharmaceutical drugs for clinical trials (CT) (customs clearance and VAT included), which is in monetary terms (rubles) a bit more than 40% higher than in 2019. The dynamics in physical terms (units) are somewhat lower, +17%, with the import volume of 672,000 units. The quarterly dynamics, and especially the monthly dynamics, were quite dissimilar; for example, the highest dynamics in monetary terms were recorded in Q1 (+52%), and the lowest in Q3 (+29%). The dynamics in Q3 were determined by the June results, when the dynamics were only +2%, which is the lowest since January.

The number of the trademarks imported has also significantly increased (621 against 549). Placebo products (222 trademarks) accounted for 15.2% of the import in monetary terms, which is the absolute minimum for the second year in a row. While the share of placebo products in monetary terms has been more or less the same, in physical terms it has dropped from 38.6% to 34.7%.

66 out of 621 trademarks had not been imported to Russia until July 2020. The import volume of GSK3228836 (code name) by GSK in monetary terms was the largest among the new 66 products. The drug, an antisense oligonucleotide that could potentially be used to treat chronic viral hepatitis B, is undergoing phase IIb studies at 13 healthcare facilities, with 50 patients involved. The formal start of the CT took place in August 2020, while the company started importing the drug in September. As for physical terms, the import of TQJ230 by Novartis was the largest among the new drugs. It is also an antisense oligonucleotide, which is currently undergoing a phase III multicenter study involving 700 people at 51 medical centers. The aim of the study is to assess the effect of lowering the level of lipoprotein (a) with TQJ230 on the occurrence of significant cardiovascular events in patients with overt cardiovascular diseases. Novartis received permission to conduct the study back in May 2020, but waited until July to start importing the drug. 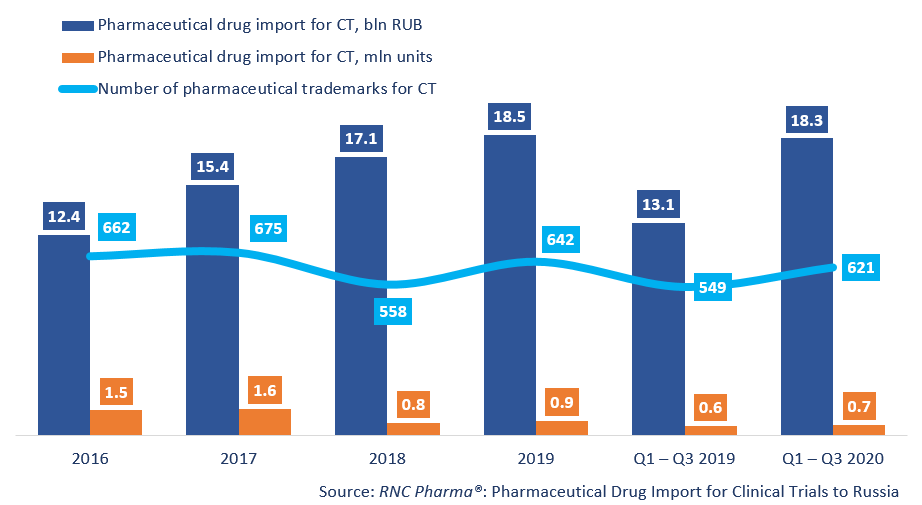