Import of Veterinary Drugs, Feed Supplements, and Veterinary APIs to Russia in 2019


In 2019, Russia imported 37 bln RUB worth of veterinary drugs (customs clearance, VAT included), which is in monetary terms (rubles) 39.7% higher than that in 2018. The dynamics of the import of feed supplements have turned out negative for the first time since 2010 (-5.3%), with the total volume of 36.4 bln RUB. As for veterinary APIs, the import volume is 3.2 bln RUB, with the dynamics of +66%.

However, the positive dynamics of the import of veterinary drugs and APIs are somewhat artificial. Preparing for the new procedure of importing veterinary products, the importers made sure to have their warehouses restocked so that the transition period would go smoothly. The import of pharmaceutical drugs witnessed similar trends, with the importers preparing for the labeling system coming into force on January 1, 2020, which was then postponed until July 1, 2020.

The dynamics in physical terms were similar to those in monetary, but not the volumes. In 2019, Russia imported 39.8 mln units of veterinary drugs (+41.3%), 11 mln units of feed supplements (-1%), and 1.4 tons of veterinary APIs (+70.2%). The dynamics of the import of feed supplements in physical terms have been negative since 2018.

As many as eight companies in the top 15 manufacturers of feed supplements have negative dynamics. Sumitomo (Japan) is the only one worth mentioning with the import having grown by 9.6 times. The company was importing only DL-Methionine in 2019. Among the importers of veterinary APIs, Shandong Shengli Bio-Engineering is the leader in dynamics in monetary terms, having increased their imports by 9.2 times. It is followed by Goros21.ru (imports grown by 8.7 times), which was importing 6 API names, including 4 new ones. 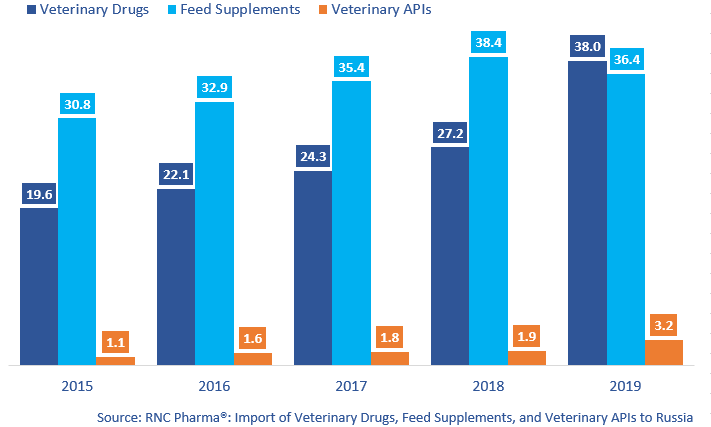