Between January and October 2020, Russia imported RUB 404 bln worth of ready-made pharmaceutical drugs (customs clearance and VAT included), which is in monetary terms (rubles) 29.6% lower than in 2019. That is clearly the high base effect, since back in October 2019 the importers were hard at work, preparing for the launch of the labeling system by actively stocking up the warehouses; the import volumes were 2-3 times higher than usual. The growth rates of the in-bulk import are still positive, although only +2.2%, with the import volume of RUB 110.8 bln.

The October results did not deviate from the current trends, but we should again take into account the vigorous activity of the importers in October 2019. In October 2020, Russia imported RUB 43.3 bln worth of ready-made drugs (-61%), or 101 mln units (-68%). The growth rate of the in-bulk import was also negative, albeit slightly higher.

As for the importers of in-bulk drugs, AbbVie has the best growth rate in the top 25 (imports have increased by 44.5 times in monetary terms). The company was importing 4 products, among which Humira and Viekira Pak, packaged at the facilities of Ortat (R-Pharm group), contributed to the growth rate the most. AbbVie is followed by Octapharma (imports grown by 36 times), which was importing only solution for infusion Albumin, packaged at Skopinpharm (Pharmimex group). 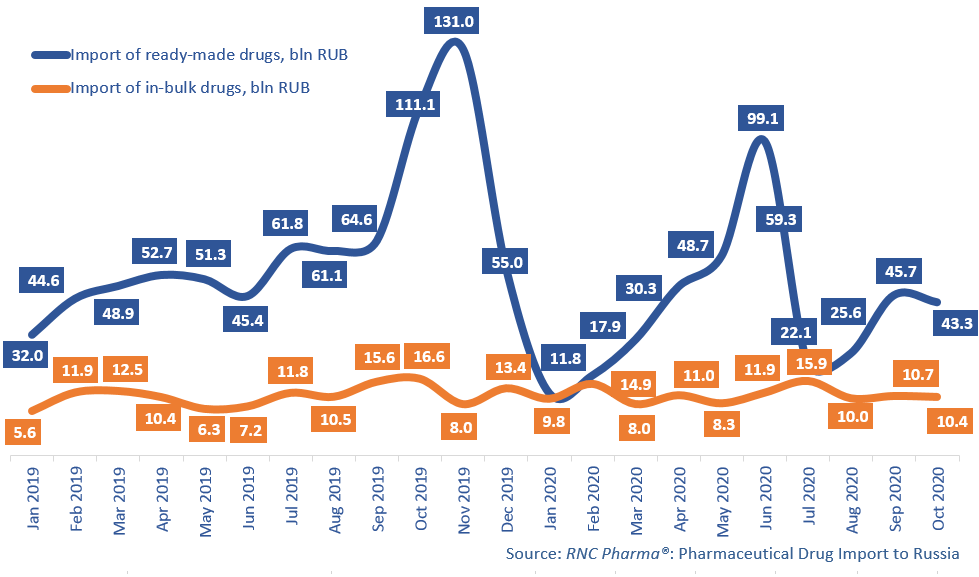