More than a third (35%) of doctors are adamantly opposed to the idea of telemedicine, according to a survey by the RNC Pharma analyst company and the Doktor Na Rabote (Doctor at Work) social media service for doctors. At the same time, many have pointed out that depending on the specialty of the doctor and, most important, the diagnosis of the patient, telemedicine can still be justified in some cases. However, one respondent says that the doctor can miss so much even at an offline examination, and it is unimaginable what would happen online.

Only 7% of the respondents believe that both doctors and patients are fully prepared for telemedicine. One of the respondents says that “the result is more important than the method”, but most doctors have still expressed reservations. 14% of the doctors are ready to consider telemedicine only “if the legal issues regarding the responsibility of the doctor and the patient are thoroughly worked out”, and another 5% spoke about the need “to implement special software and include private laboratory diagnostic services into the compulsory health insurance system.”

Another 33% of the doctors consider it possible to use telemedicine to monitor patients who have already been diagnosed, when it is necessary to observe the dynamics of the course of the disease or adjust the treatment regimen. The respondents also noted the possibility of organizing quick consultations with colleagues in case of observing “complex patients.”

The Ministry of Economic Development of has proposed amendments to the law “On the Basics of Protecting the Health of Citizens”, which would allow diagnosing patient online. Do you consider telemedicine possible in Russia? (single-answer question) 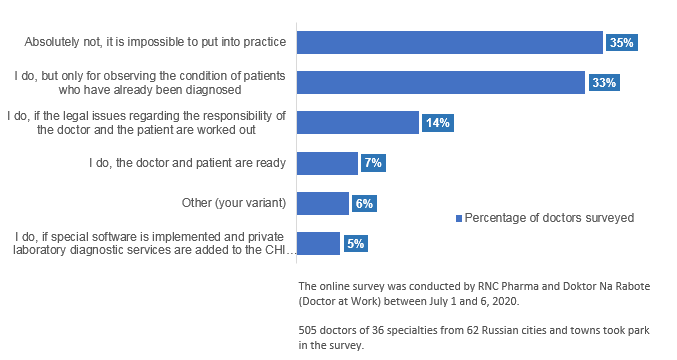