In Q1–Q3 2021, the total volume of the online sales or reservations of pharmaceutical products (pharmaceutical drugs and parapharmaceuticals) in Russia amounted to RUB 141.6 billion (end-user prices, VAT included), 34.5% up from the same period in 2020. The total growth rate of the Russian pharmaceutical retail was just over 3%. After the disastrous results of Q1 2021, the largest growth was in Q2–Q3 2021. The sales of Rx drugs still contribute to the growth rates the most, and the sales of parapharmaceuticals surged as late as in Q3 2021–a consequence of the growing incomes of the population and the low base last year, with its obvious consumption imbalances due to the pandemic.

Apteka.ru, the permanent leader of the pharmaceutical e-com ranking, has very moderate growth rates of +16% in rubles. The number of partners increased by 4,950 (31%) compared to Q1–Q3 2020—and they were the ones that contributed to the project’s growth rates the most. While it is obvious that not all of them joined at once and the level of activity could still be higher, this model is close to its limits of development unless the services are expanded by adding delivery to the end user.

Apteka.ru’s competitor, Zdravcity of Protek, has way better growth rates of 91%. The number of its members increased by 3,856 (28%) compared to Q1–Q3 2020. As of October 1, 2021, the total number of Zdravcity’s partners is 17,521, quite comparable to that of Apteka.ru (20,852). However, Zdravcity offers not only reservation options, but also courier delivery, which helps maintain the several-fold growth rates.

Among other large representatives of the e-commerce segment, Aprel has an impressive turnover growth; its turnover increased 4.7 times from the Q1–Q3 2021. Aprel has also been actively pursuing regional expansion—the total number of its pharmacies increased by 50%. The following companies have a high turnover growth: Rigla (turnover increased 3.1 times), Vasha No. 1 (2.7 times), and Farmlend (2.4 times). All these chains have been focused on developing its online services; while the number of its partners has been been growing, it is not their main focus. 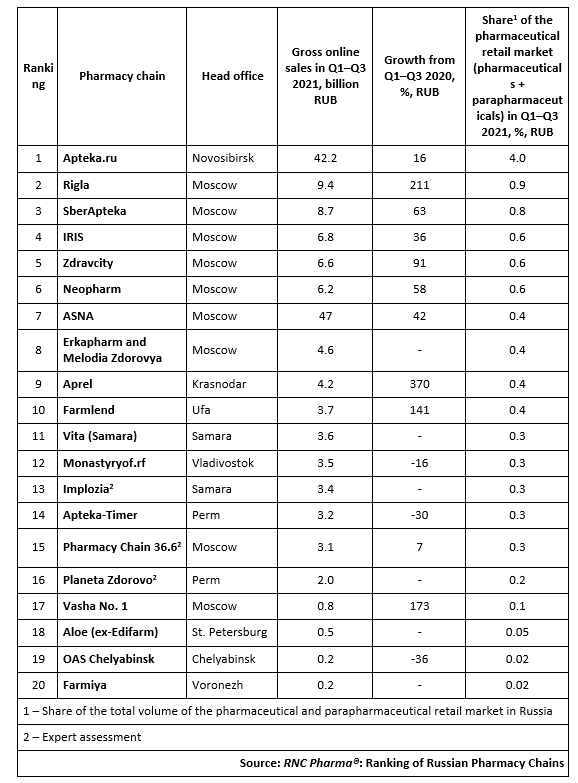