Between January and February 2021, Russian manufacturers produced RUB 101.4 bln worth of pharmaceutical drugs (manufacturer’s prices, VAT included), which is in monetary terms (rubles) 61% higher than in 2020. The growth rate in physical terms (units) is a bit lower, +16%, with the production volume of 700 mln units. If calculated in minimum dosage units (MDU), the growth rate is only +2.4% and the production volume is 11.9 bln MDUs.

120 companies were producing OTC drugs. Pharmstandard demonstrates the largest production volume, as well as more than two-fold growth rates. Arbidol is still the company’s most manufactured drug; the production has grown by 3.7 times, which is more likely a low base effect, since the first months of last year were relatively calm, and the hype and a sharp increase in production took place between March and April. Valenta has the highest growth rates among the top 10 companies, with a 54 times’ increase. Ingavirin and Grammidin contributed to the growth rates the most. 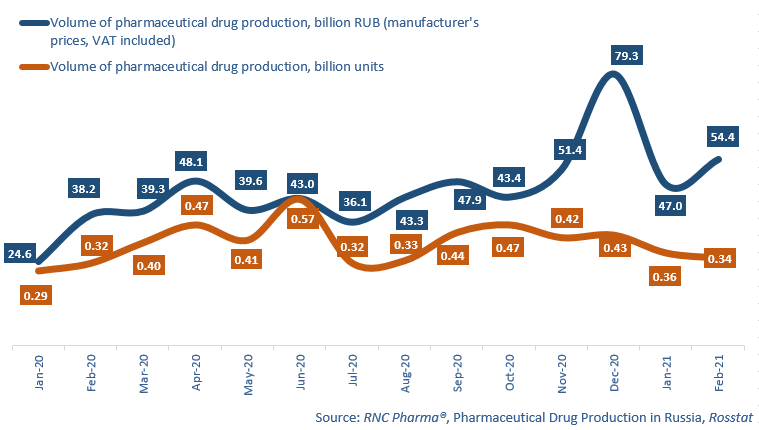