Between January and September 2020, Russia exported RUB 40.2 bln worth of ready-made pharmaceutical drugs (customs duties included), which is virtually comparable of the total export volume in 2018. The dynamics in monetary terms (rubles) are as high as +23.3%. The export volume in physical terms amounts to 0.83 bln units, with the dynamics of +27.5%.

Kazakhstan is followed by Belarus, which has the second best export volume (RUB 6 bln), but the worst dynamics (+2% in monetary terms). The dynamics of the export to Kyrgyzstan and Armenia are nearly identical, +13% and +12%, respectively. However, the export volume of the two countries totals only RUB 1.8 bln.

During the first 9 months of 2020, Russia was exporting pharmaceutical drugs to 88 countries, excluding the EEU. Ukraine (mostly DPR and LPR) and Uzbekistan account for the highest volume, with the dynamics of +27% and +25% in monetary terms, respectively. Lebanon has the best dynamics; the exports has grown by 536 times, but the export volume amounts to only RUB 719 thousand. Two Russian manufacturers were exporting three trademarks to Lebanon; AVVA Pharmaceuticals accounts for the largest volume with Lactofiltrum and Filtrum, and Chumakov Federal Scientific Center for Research and Development of Immune-and-Biological Products of Russian Academy of Sciences exported Yellow Fever Vaccine.

The exports to Macedonia has increased by 74 times. Between January and September 2020, Russia was exporting 5 trademarks there. Sotex accounts for the highest volume with BloccoC (Bupivacaine) and Octretex (Octreotide), then comes Drugs Technology (R-Pharm Group) with its Coronavir (Favipiravir). Drugs based on Favipiravir have become a significant part of the export, with the total volume of RUB 440 mln (excluding the EEU). Turkmenistan, Bolivia and Uzbekistan account for the largest volumes.

This year, Russian manufacturers have also started exporting to four new directions, out of which the Dominican Republic accounts for the highest volume (RUB 2.2 mln). The only drugs exported there was Rituximab by Biocad. 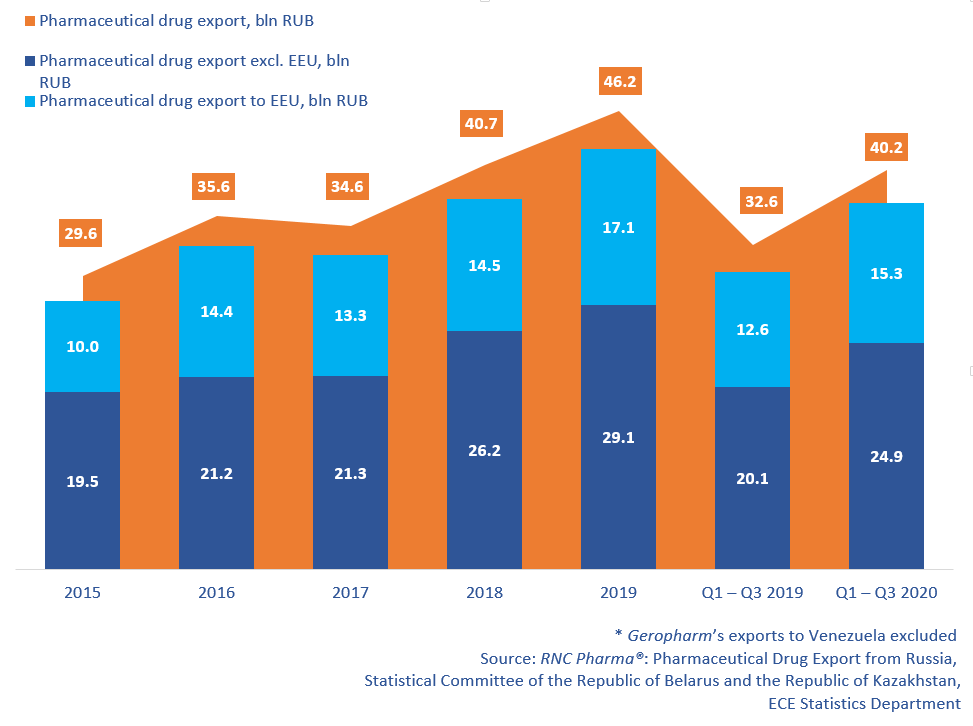