Pharmaceutical Drug Production in Russia (May 2021)


Between January and May 2021, Russian manufacturers produced 239.1 billion rubles worth of pharmaceutical drugs (manufacturer’s prices, VAT included), up 26% from the same period last year in monetary terms (rubles). The growth rate in physical terms (packages), however, is still negative, -9.2%, with the production volume of 1.7 billion packages. Despite the serious drop in packages, the growth rate in MDUs (minimum dosage units) is much better: -1.7%, 32.6 billion MDUs produced. Apart from the falling demand, the standard package has changed.

The growth rates in May 2021 in both monetary and physical terms are negative, -1.7% and record-worthy -28.4%, respectively. However, the influence of the pandemic is quite obvious here; while the pharmaceutical market was dealing with the rush demand for certain drugs throughout spring 2020, this year the spring did not witness any serious surge in COVID-19 incidence. The negative growth rates are the result of the so-called high-base effect.

The production of OTC drugs declined the most, with the growth rate of -16% for January—May 2021. For comparison, the production of Rx drugs decreased by only 1%. The observed trend of such difference in growth rates has been consistent since the beginning of this year, not only in April and in May, so it does not have anything to do with the pandemic; the influence is indirect at most. It is mainly the result of household incomes and consumption of non-essential products decreasing, as well as the fact that usual consumers of OTC drugs are starting to prefer food supplements.

Tula Pharmaceutical Factory still has the best growth rates in physical terms among the top 20 manufacturers of Rx drugs. The company’s production increased 5 times over the year; its powder for solution Magnesium Sulfate contributed to the growth rates the most. Promomed and Obnovlenie also had high growth rates, +43% and +41%, respectively. Ceftriaxone and Cefotaxime contributed to the growth rates of Promomed (increased by 53% and 2.9 times, respectively). Some other products of the company had better growth rates, in particular the production of Levofloxacin increased 11.6 times over the year, but the production volumes of Ceftriaxone and Cefotaxime were much larger in absolute terms. As for Obnovlenie, the most manufactured products were Anaprilin (manufacture increased 7 times) and Prednisolon (3 times).

Valenta had the highest growth rates in physical terms among the largest manufacturers of OTC drugs (+69%). The old popular products contributed to the growth rates, like Grammidin (increased 3.4 times) and Trimedat (2.5 times). The production of Ingavirin grew by “only” 26%. Valenta is followed by Ozon with +53%. The most manufactured products here were Ambroxol (manufacture increased 2.7 times) and Fluconazole (+56%). 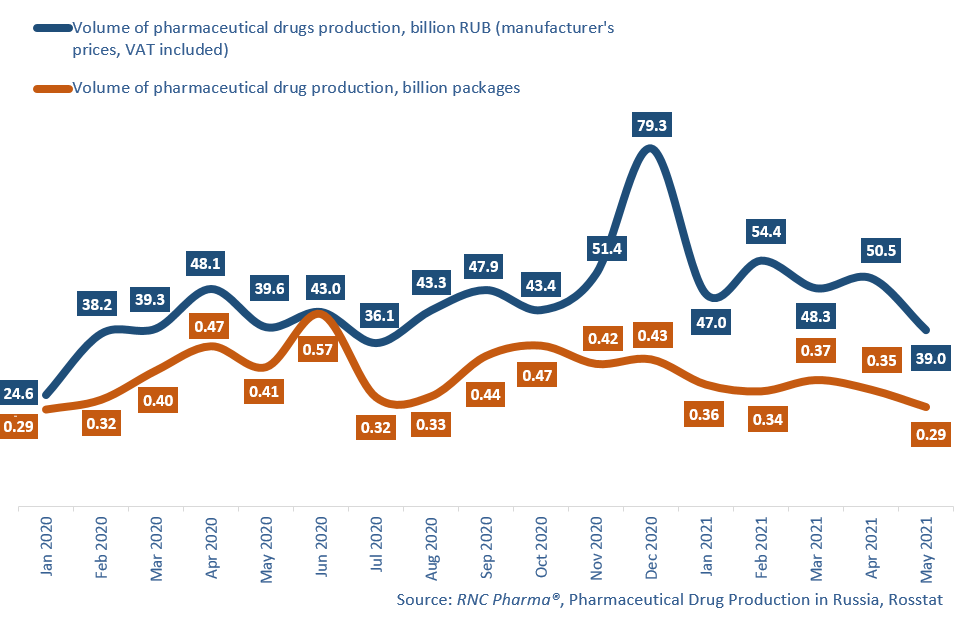