In January–April 2022, Russia imported 73.2 billion rubles’ worth of APIs (customs clearance and VAT included), up 0.5% from the same period in 2021. In physical terms, the import volume was 6,500 tons, up 15% from January–April 2021. However, mostly January and February contributed to the high growth rates.

The growth rates in April 2022 were positive in monetary terms (+29%), but negative in physical (–14%). This was due to a change in the range of imported products, not due to rising prices, while the average price increased to around 17,000 rubles per 1 kg. Notably, the growth rates reached this year’s high back in January to start to decline later, while the peak was in March a year earlier.

Another major change concerned the import chain. In April 2022, the total number of importing countries, including transit countries, fell to 25 against 36 in 2021. The import volumes from China and Germany significantly decreased compared to April 2021, while import from the Netherlands, Spain, and Austria grew 3, 2,9, and 0.5 times against April 2021, respectively. India also managed to increase its import, albeit only by 3.5%, after a total failure back in March.

Osimertinib was the most imported API in January–April 2022. The product was not imported a year earlier, although the localization started back in 2020, when the first batches of Tagrisso were produced at the facilities of AstraZeneca Industries in Kaluga Oblast. The import of pancreatin showed the best growth rates among the top 20 INNs; it grew 5.5 times against January-April 2021. The product was imported from 6 different countries, with Veropharm, which produces Kreon, accounting for the largest import volumes. The import of rebamipide had the highest growth rates in monetary terms. While the API did not make it into the top 20, its went up 101 times against January–April 2021. Rebamipide was purchased by three companies at once, with Pro.Med.Cs accounting for the largest volumes—the company localized the production of its Rebagit at the facilities of ZiO-Zdorovye in Podolsk.

As for physical terms, the import of lactulose showed the best growth rates among the top 20 INNs; its import increased 30 times against January–April 2021. Here, Veropharm purchased the largest volumes for the production of Dufalac. The import of Diosmin, purchased by 7 manufacturers, also had significant growth rates (import grew 6.4 times). Binnopharm Group, which produces Venarus, accounted for the largest import volumes. 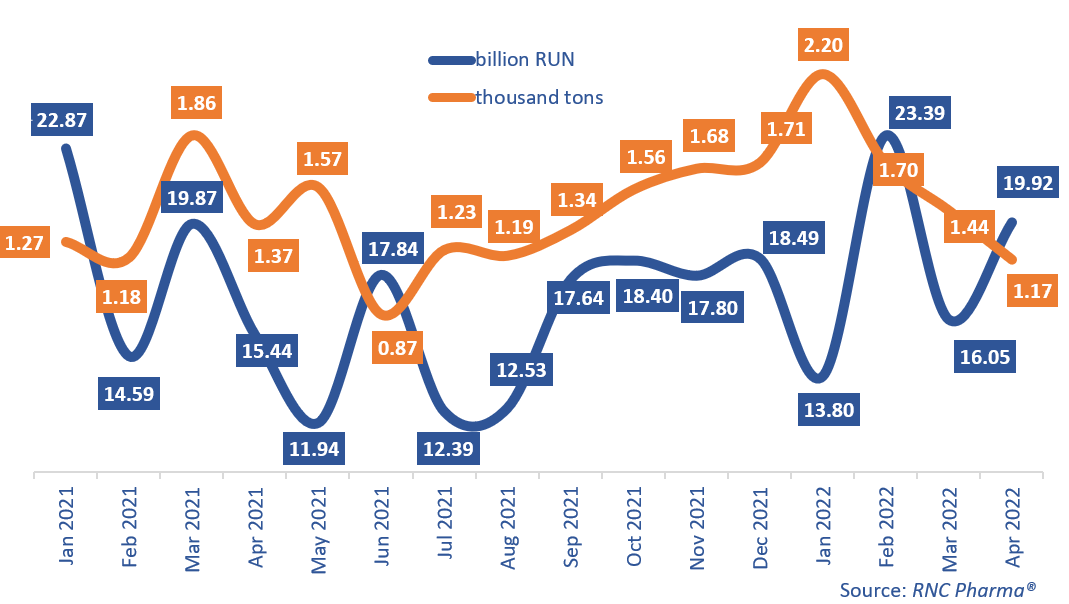