Between January and March 2020, Russia imported 262 thousand units of pharmaceutical drugs for clinical trials (CT), worth 6 bln RUB (customs clearance prices, VAT included). The dynamics in both monetary (rubles) and physical terms (units) are +56%. The number of imported trademarks has risen from 320 to 386. The number of placebo drugs has grown from 109 to 139 trademarks. In physical terms, placebos account for around 30% of the import (against 46% in 2019), while in monetary terms it is 21.7% (nearly the same as in 2019).

<>Eye drops Ikervis (Ciclosporin) by Santen are the leader in physical terms with 38.5 thousand units. The drug is currently undergoing a phase IIIb study of the long-term development of the symptoms of dry eye syndrome complications in patients with severe keratitis. 10 medical centers and about 140 patients are involved in the study.

While MK-3475 (Pembrolizumab) by MSD is the leader in monetary terms, the import volume of the drug in physical terms is only 6.5 thousand units. The drug is used in several dozens of clinical trials that study the effectiveness and safety of the drug for various oncological diseases in various combinations. MK-3475 is undergoing phase III studies as part of international multicenter clinical trials. Three studies have already been launched in 2020.

In Q1 2020, Russia started importing 39 new trademarks that had not been imported since 2013. Veltassa (Patiromer) by Relypsa accounted for the largest import volume among the new trademarks. The drug is undergoing a phase IIIb study to assess the treatment of hyperkalemia in patients receiving inhibitors of the renin-angiotensin-aldosterone system for heart failure. The study involves 18 clinical centers and 158 patients.

Ikervis is the leader in physical terms again, followed by Veltassa (2.5 thousand units). Ribocarbo-L (Carboplatin) comes next; the drug was imported for the trials of Biocad’s BCD-100. Two studies to assess the effectiveness of the combination of BCD-100 with a number of drugs, including Carboplatin, are being conducted at the same time. 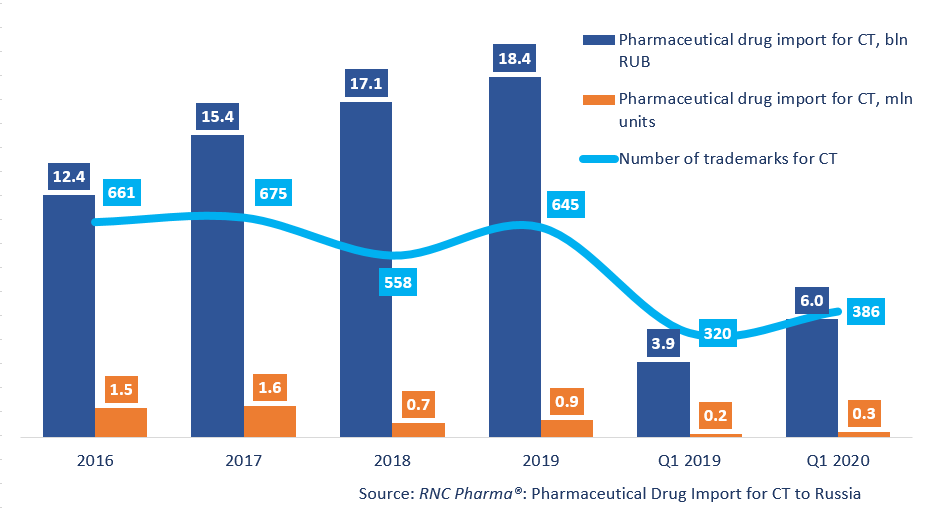