Survey by RNC Pharma and Doktor Na Rabote (Doctor at Work): 10% of Russian Pharmacists Do Not Read Digital Media


19% of pharmacists read the digital version of the newspaper Farmatsevtichesky Vestnik, 17% – Katren-Style, and around 12% choose Novaya Apteka, according to an online survey by the RNC Pharma analyst company and the Doktor Na Rabote (Doctor at Work) social media service for doctors. It is noteworthy that many respondents read several publications at the same time, and the order of priority is set in approximately the same way. The top three publications include two print media, with only Katren-Style now fully digital.

Pharmznanie tops the second tier of the most read online resources for pharmacists. While the resource itself does not position itself as a media, industry experts, apparently, perceive it as an important source of practical information since 4% of the respondents regularly refer to it. Provizor.ru rounds out the top five, although it is too not exactly a media but a personal blog.

It is interesting that about 10% of the respondents do not read any electronic publications at all. They are not only those belonging to the older age group though: around a quarter is represented by persons under the age of 35. They prefer paper media to digital editions.

The “Other” category (24% of the respondents) received a big variety of answers since there are many specialized publications in the pharmaceutical market. Among the respondents who chose this answer were also those who do not stick to one publication but use search engines, websites of specific companies, Telegram channels, etc.

Russian pharmacists seem to have a rather broad outlook and sometimes actively use specialized publications for doctors, in particular, a number of respondents named the following publications as their main digital sources of information: the scientific journal Meditsinsky Vestnik, the medical journal Molodoi Vrach and others.

What digital media for pharmacists do you read? (single-answer question) 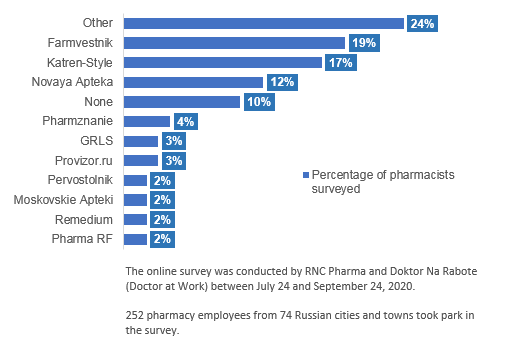