Import of Veterinary Drugs and Feed Supplements to Russia (May 2020)

The number of manufacturers importing veterinary drugs to Russia has grown from 99 to 103. Companies out of the top 20 were the ones that had the best import dynamics between January and May 2020. In particular, Gigi (Latvia) had the highest dynamics in monetary terms (imports grown by 9.2 times). Among the two veterinary drugs that the company imported, drug for congestive heart failure in dogs PimoPet contributed to the dynamics the most. Gigi is followed by Ashish Life Science (India), the company's imports has increased by 5.1 times. Ashish Life Science is familiar to Russian consumers as the manufacturer of drugs for livestock treatment. Its insectoacaricide Diazecto contributed to the dynamics the most.

As for feed supplements, Mixscience (France) has the highest dynamics (imports grown by nearly 32 times). The company imported only one product – Valopro, supplement for ruminant animals, which helps to improve the absorption of protein and energy. 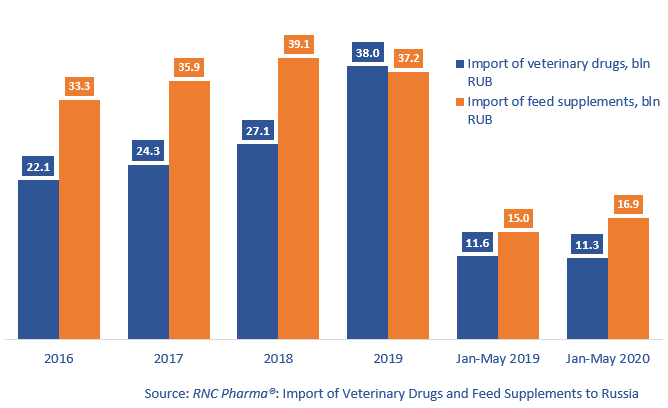