The big difference in dynamics is due to the new import structure. In particular, the import of Cefotaxime and Ceftriaxone (1g) has fallen considerably over the year, while the import of these drugs (40g) has risen. The dynamics of the total import are 1% if calculated in MDU (minimum dosage units).

Between January and April 2018, Russia imported pharmaceutical drugs of 14 companies of the EEU countries. The absolute leader in monetary terms is Belmedpreparaty (Belarus), which accounts for around 36% of the total import. Its import has fallen by 10% over the year, though. It is follow by Kelun-Kazpharm (Kazakhstan), with a nearly 25 times increase. Since January 2018, the company has been importing only 5 products, mainly Metronidazole and Ciprofloxacine (for infusion).

Over the year, 12 new products has been added to the import line, with Ciprofloxacine and Docetaxel being the leaders (Kelun-Kazhpharm). 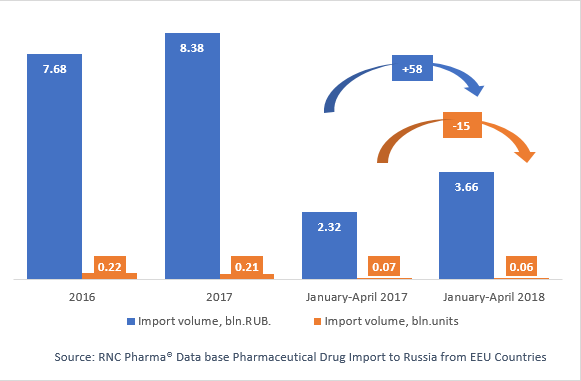