Interestingly, the crisis that unfolded after the start of a special military operation in Ukraine has so far not had a significant impact on the import of both veterinary drugs and feed supplements. In March 2022, the growth rate of the veterinary drug import was 10.2% against 16.8% in February. As for feed supplements, the growth rate in March 2022 was 43% in monetary terms, but January and February also saw double-digit growth rates of more than 30%. In physical terms, however, the import still suffered a significant decrease of –12.3% in tons, an obvious consequence of the logistical difficulties that arose in the early stages of the crisis.

Geographically, veterinary drug imports in March more or less remained the same, except that the import from Poland increased noticeably, which seems rather strange, since imports through Poland became much more complicated after the start of the crisis. However, imports of feed supplements underwent more serious changes, in particular, the imports from China and Turkey went up from March 2021 (3.2 and 3 times, respectively). Surprisingly, the imports from UK increased, and quite sharply, too (13 times from March 2021).

Spanish Biokorm Intemational had the highest growth rates in March 2022 among the top 20 manufacturers of veterinary drugs. The company’s imports grew 75 times from March 2021, with Amoxivet and Amoxigran, antibiotic (amoxicillin) drugs for livestock, contributing to the growth rate the most. The Spanish company is followed by Zhejiang Dayang Biotech Group (China). The company increased its imports 10 times from March 2021, mainly thanks to Enduro, an antibiotic for livestock. As for the largest importers of feed supplements, German Phytobiotics increased its imports 13 times, with Sangrovit, an additive to increase the productivity of poultry, contributing to the growth rates. Chinese Tongliao Meihua Biological Sci-Tech also showed significant growth (4.5 times from March 2021), mainly due to the import of Fodder Additive Valine. 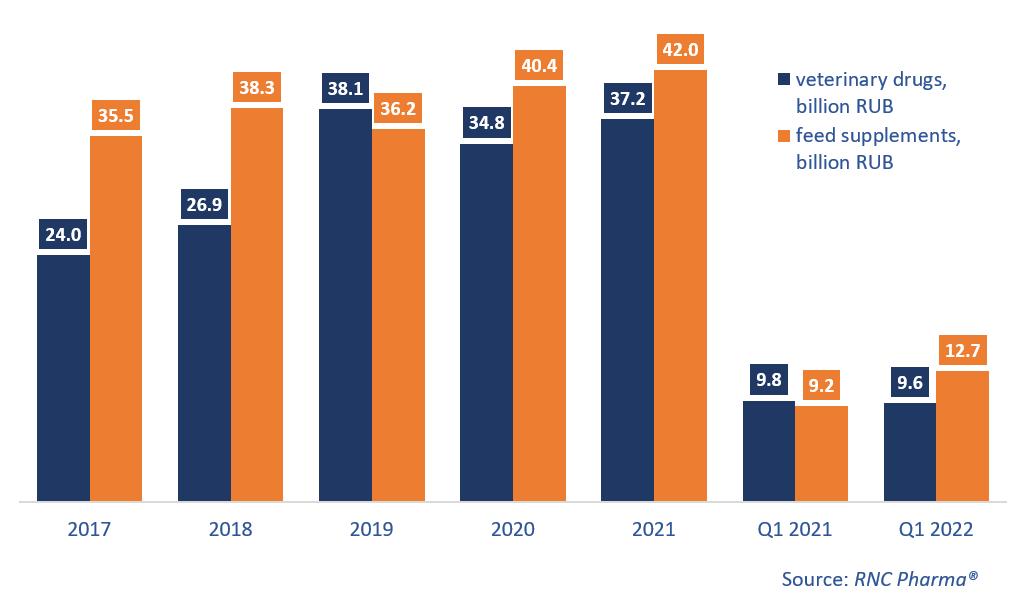