The begging of 2018 was quite eventful for the Russian pharmaceutical wholesale. First, the bankruptcy process of Rosta started in January, with a rather high level of debt overburden for the pharmaceutical retail, which is estimated to be 10-11% of the annual volume of the retail market by Protek. So, the external prosperity of wholesale companies (by the end of 2017, only 4 out of the 15 largest companies has had their market share reduced) can be replaced by a recession at any moment.

Second, the procedure for challenging the rights of production of pharmaceuticals under patent protection, an important and rather painful process, started. Here, the most active player is the company Nativa. This situation is of interest primarily because alternative drugs produced by Nativa have already appeared in state contracts, concluded with a number of wholesalers. One of these distributors, Mamont Farma is clearly affiliated with Nativa.

While not unique, the situation is quite impactful for the Russian pharmaceutical market. Only those who understand the administrative procedures accompanying the process of introducing pharmaceuticals to the Russian market can initiate such activity. In a sense, this is advanced legal work. Usually such battles are typical for very mature markets, until recently Russian companies acted as observers at best here.

Finally, we saw a wave of the so-called black PR, aimed not just against one particular company, but also against a specific person – the main owner of the company R-Pharm, which in its own way is also impactful. The quality of the campaign is very clumsy, and there is little non-biased information about the situation. However, the very fact of such activity makes us think about the existence of a global confrontation between the giants of the Russian public procurement system. Moreover, some echoes of this battle are increasingly becoming public.

Tab 1. Top 15 pharmaceutical distributors with the largest market share of direct shipments of drugs (including preferential shipments), in monetary terms (2017) 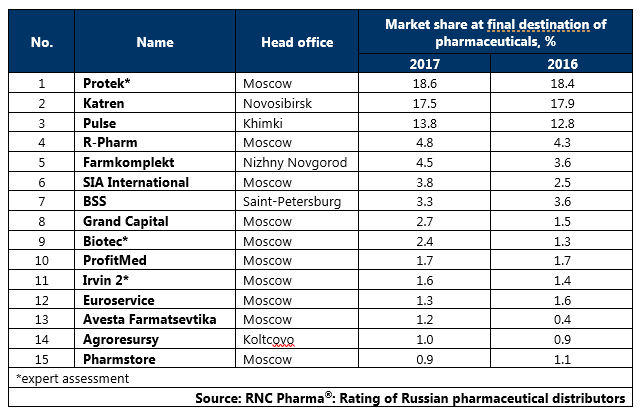