Bioveta (Czech Republic) is the absolute leader in import dynamics among the top 15 importers of veterinary drugs, with +94%. Between January and September 2019, the company was importing 14 trademarks. The drug for otitis externa and superficial dermatitis in cats and dogs Otibiovin (a 7.2 times increase), drug for mastitis in lactating cows Gamaret (6.2 times increase) and Newcastle disease vaccine Orniprim (a 5 times increase) contributed to the dynamics. Boehringer Ingelheim has the worst dynamics among the top importers (-26% in monetary terms). In particular, the import of the company’s key vaccines Ingelvac has dropped by 47% monetary terms.

As for the top 15 manufactures of feed supplements, Miavit (Germany) is the leader in import dynamics in monetary terms (+70%). Metabolism boots in livestock Choline Chloride and livestock productivity booster Livervital contributed to the dynamics, with 4.6 and 2.3 times increases. Pt. Cheil Jedang (Indonesia) has the lowest dynamics, -65%. The company has decreased the import of all its products, including two types of Lysine and L-Tryptophan.

Antibiotic Manufacturer (Shenyang, China) is the leader in import volume among the top 15 API importers, with a 16 times increase. The company imports only Rifampicin to Russia. Guobang Pharmaceuticals (Zhejiang, China) has the worst dynamics, -11%. Only 2 out of 6 APIs that the company imports have positive dynamics: antibiotics Ciprofloxacin Hydrochloride and Marbofloxacin. 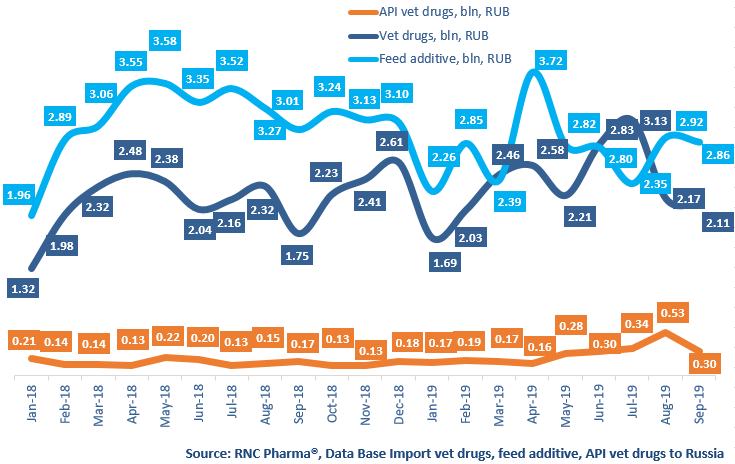