In January–July 2022, Russia imported 459.4 billion rubles’ worth of ready-made pharmaceutical drugs (customs clearance and VAT included), up 6% from the same period in 2021. As for bulk drugs, the growth rate was 25.6%. In physical terms, the growth rates for both groups were negative. The import volume of ready-made drugs was around 942 million packages, down 10.2% from January–July 2021. If calculated in minimum dosage units (MDU), the import volume of ready-made drugs was 18.2 billion MDUs, down 12.2%. The growth rate of the import of bulk drugs was –32.4% in MDUs, with 903.2 million MDUs imported.

The July results differed from June in both short-term and long-term growth rates. The import of ready-made drugs in July 2022 went down 9.2% in rubles from July 2021, and that of bulk drugs dropped 17.7%. In physical terms, the import of ready-made pharmaceuticals dropped by 14.7%, while that of bulk drugs shrank by 30.8%. This is a result of the low activity in July 2022, as well as the large volumes in the comparison period.

Even with the market practically stagnating, many of the top importers had high growth rates in January–July 2022. Vertex Pharmaceuticals had the best growth rates among the top 20 manufacturers of ready-made drugs with the largest import volumes—its imports grew 13.6 times against January–July 2021. Vertex Pharmaceuticals is followed by AstraZeneca (imports grew 2.5 times). Trikafta and Orkambi, drugs for the treatment of cystic fibrosis, contributed to the growth rates of Vertex Pharmaceuticals, accounting for 96% of the total import volume. As for AstraZeneca, two cancer drugs, Lynparza and Coselugo, helped the company’s growth rates. Sarepta Therapeutics showed unprecedented growth rates among the companies outside the top 20—its imports increased 54 times against January–July 2021. It is quite obvious that the company imports drugs for the treatment of rare diseases, in particular, Exondys 51 and Vyondys 53—both are used for Duchenne muscular dystrophy and have not been approved in Russia yet. 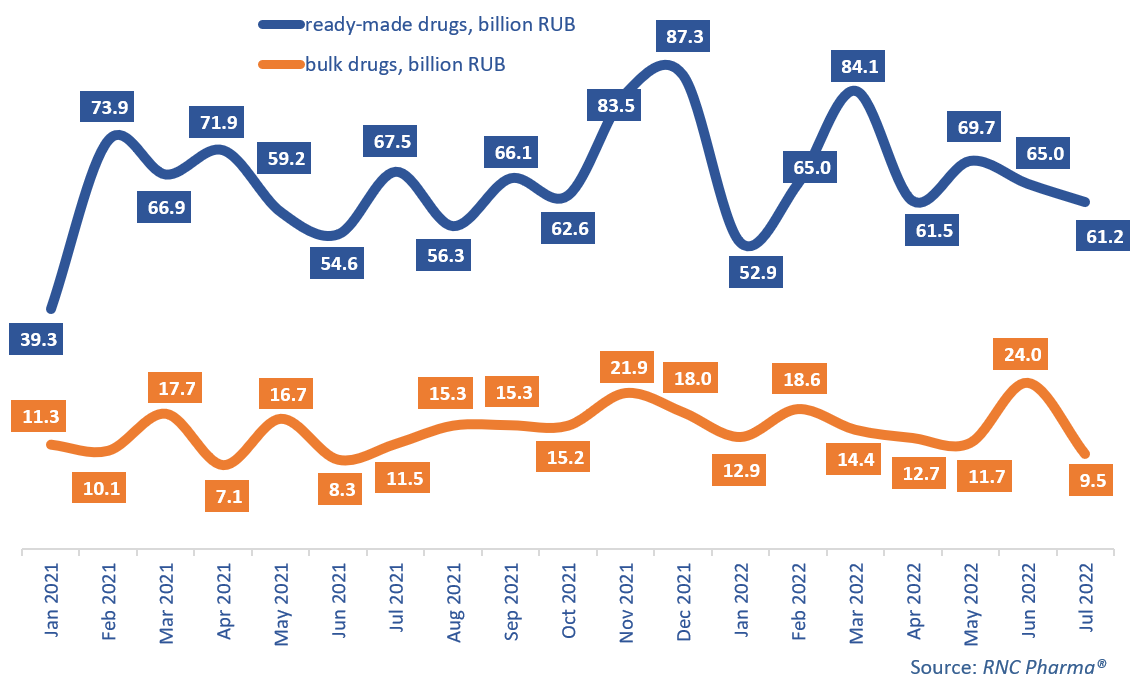