Import of Veterinary Drugs and Feed Supplements to Russia (April 2020)


Between January and April 2020, Russia imported 8.4 bln RUB worth of veterinary drugs (customs clearance and VAT included), which is in monetary terms (rubles) 9% lower than in 2019. The dynamics of the import of feed supplements in monetary terms are +12%, with 13.4 bln RUB.

The number of importers of veterinary drugs has increased from 97 to 100 companies. Chia Tai Biochemistry (Pucheng, China) and Laboratorios Syva (Spain) have the highest dynamics among the top 20 companies. The first one, which imported only antibacterial Chlortetracycline, has increased its imports by 3.8 times. The imports of Laboratorios Syva has grown by 3.5 times; its Mamifort contributed to the dynamics the most. Boehringer Ingelheim and Zoetis has the lowest dynamics, with -58% and -53%, respectively. However, both companies had accumulated enough warehouse stocks by late 2019, and have been using them since.

210 manufacturers (+5 since 2019) imported feed supplements to Russia between January and April 2020. ZMS Europe and Ajinomoto Group have the highest dynamics (imports grown by 12.8 and 11.3 times, respectively). Pt. Cheil Jedang has the lowest dynamics of -56%, together with Daesung (-52%); both companies specialize in aminoacids. Pt. Cheil Jedang decreased the import of L-Lysine Monohydrochloride (-49%) and L-Tryptophan (-21%). Daesung imported only Sewon L-Lysine Monohydrochloride. 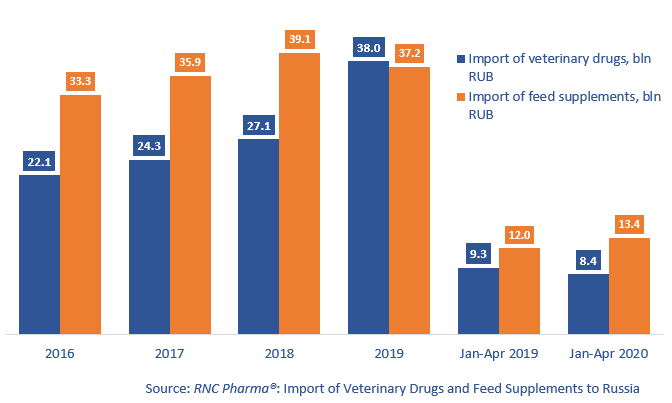