In March 2015, the volume of the Russian import of ready-made pharmaceutical drugs remained almost the same and amounted to 35.4 bln RUR. Over the year, the import expenditures has risen by 12%. However, the actual volume of import is decreasing, compared to March 2014, as it has fallen by 1.1% over the year.

Meanwhile, the import of packaged products continues to rise fast. In March, the import expenditures amounted to 7.7 bln RUR, which is 56% higher than those of the previous year. The actual amount of import in March amounted to 351.5 mln of single-doses, with the annual dynamics of more than 15%.

Overall, the quarterly dynamics corresponds to that of March. Since the beginning of the year, the import expenditures for ready-made drugs has risen by 11.8%, with the dynamics of the import of packaged drugs of around 30%.

As of Q1 2015, the ruble remains the preferred currency. 91.9% of all contracts for the import of ready-made pharmaceutical drugs are concluded in rubles. Over the year, those contracts has even risen in number (+0,9%), with the number of contracts concluded in euros decreasing. 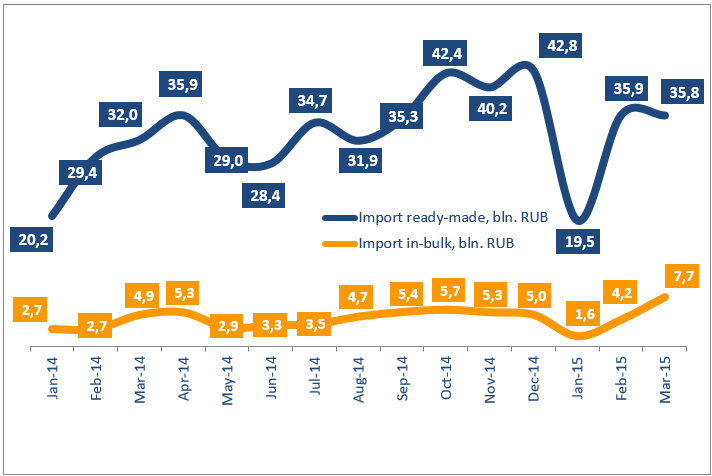