In 2011, the post-Soviet countries started to build a single customs zone. As a result, the transport control was placed on the external borders of the member countries, and the domestic transportation of products became untraceable. In 2017, Russia imported 8.4 bln RUB worth of pharmaceutical drugs manufactured in the EEU countries (wholesale prices), which is in monetary terms 9.1% higher than that of 2016. In physical terms, Russia imported nearly 212 mln units of drugs, which is 3.5% lower than that of 2016.

Belarus produced 85% of the import in monetary terms and up to 93% in physical terms. In 2017, Russia imported pharmaceutical drugs of 11 various manufacturers from Belarus, with Belmedpreparaty and Borimed being the leaders. However, not all pharmaceuticals were of Belarusian origin.

A number of Russian companies place the production of certain drugs on a contract basis in Belarus. In 2017, Russia imported 6 of those drugs. The leader in monetary terms is Next Uno Express (Otcpharm), which is produced at Minskintercaps facilities. Calcium Folinate VIAL (Alvils) comes second, with the import having increased by nearly 11 times over the year.

Belarus is followed by Kazakhstan. Russia imported pharmaceutical drugs from 3 Kazakh companies, which is around 14% of the import in monetary terms. Armenia is the last one, with 1%. Russia imports 7 drugs by Yerevan Chemical and Pharmaceutical Company, which is the only Armenian company that produces drugs for Russia. Thiamine chloride is the most imported drug from Armenia. Pharmaceutical drug producers from Kyrgyzstan are unable to offer anything to Russia yet. 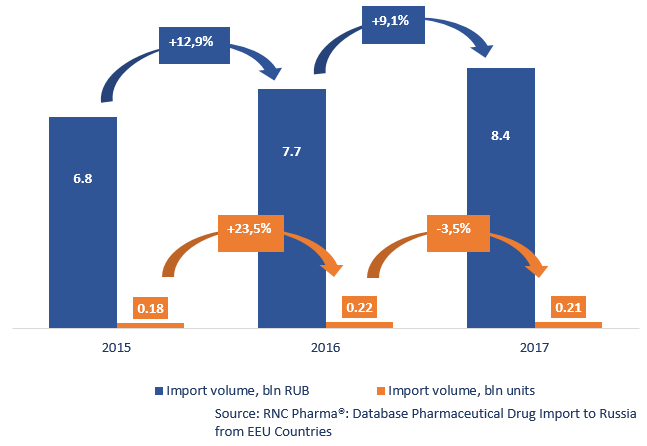