Survey by RNC Pharma and Doktor Na Rabote (Doctor at Work): 67% of Russian Doctors Do Not Trust Homeopathic / Release-Active Drugs


Only 6.1% of Russian doctors often recommend homeopathic / release-active drugs to their patients, according to a survey conducted by the RNC Pharma analyst firm and the Doktor Na Rabote (Doctor at Work) social media service for doctors. This group, mainly represented by men aged 46 and above, included doctors of more than 30 specialties, with 40% of them therapists, pediatricians, and neurologists. Another 27% of the respondents say that “the type of the drug does not matter as long as it is clinically effective”. Thus, about 33% of the Russian doctors seem accepting of release-active drugs.

Another 25.9% of the experts believe that homeopathic / release-active drugs demonstrate the placebo effect at best. Around 22% of the respondents are ready to consider homeopathic medicines only as part of psychotherapeutic treatments, which allows such treatment to be covered by the compulsory insurance plan, on the one hand, and requires amending the list of diseases and conditions that release-active drugs can be used for, on the other hand.

Finally, almost 19% of the doctors strongly opposed to homeopathic medicines, calling them “pure quackery.” Notably, this answer had strong age and gender differences and was more often chosen by male respondents under 45.

What do you think about homeopathic / release-active drugs? (single-answer question) 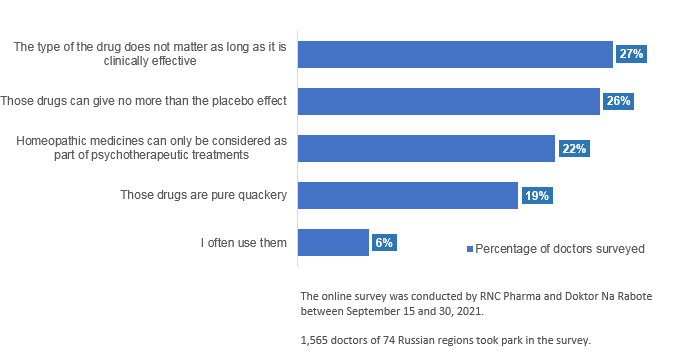