Between January and April 2020, Russia imported 56.7 bln RUB worth of APIs (customs clearance and VAT included), which is in monetary terms (rubles) 60% higher than in 2019. While the average price per 1 kg has increased by nearly 30% (to 12.8 thousand RUB, customs clearance and VAT included), the dynamics in physical terms (kg) are +23%, with the import amounting to 4.4 thousand tons.

Despite the growing prices, the dynamics varied greatly for particular APIs. Among the top 25 INNs, the price for Bisoprololum has grown by more than 13 times. The price skyrocketed only due to Merck’s imports as the company imports the drug for its localized production at a price 27 times higher than the average one (which has also increased by 17%). The price for Amlodipinum has grown by 2.8 times due to KRKA increasing its imports (the company’s price is nearly 66 times higher than that of the other buyers).

However, there has also been a few price drops. The price for Indapamidum has fallen by 77% due to Servier and KRKA dropping their import price by 30% and 20%, respectively. The price for Lamivudinum, which was imported in the amount of 4 kg by only one company in 2019, has decreased by 36%. This year, Lamivudinum is imported by 7 companies at a much higher volume. 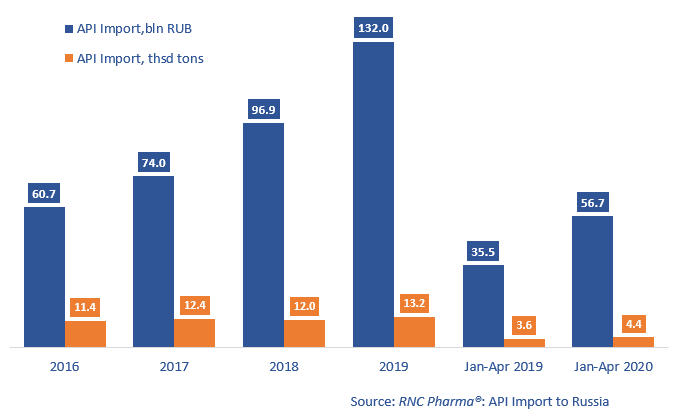