Between January and March 2019, Russia imported 14.2 bln RUB worth of veterinary products (free circulation prices), which is in monetary terms (rubles) 1.8% higher than that of the same period in 2018. The dynamics of the import of veterinary drugs are +10% (6.2 bln RUB), which is the highest dynamics among the three groups. The lowest import dynamics belong to feed supplements, with -4.5% (7.5 bln RUB). The dynamics of the API import in monetary terms are +8.3%, with 529 bln RUB.

Among the top 20 largest importers of veterinary drugs, Bioproperties has the highest dynamics in monetary terms with a 6.7 times increase. It imports vaccines MS-H and Eimeriavax to Russia.

As for the top 20 importers of feed supplements, Innov AD NV (Belgium) is the absolute leader with a 4.3 times increase. It imported 12 feed supplements to Russia, with за Format and Escent having the biggest dynamics.

Among the API importers, Yabang-QH Pharmachem (Changzhou, China) Чанчжоу в КНР is noteworthy with a 6.7 times increase in monetary terms. It imported 3 APIs to Russia, with antihelminthic Albendazole accounting for the biggest part of the company’s import. 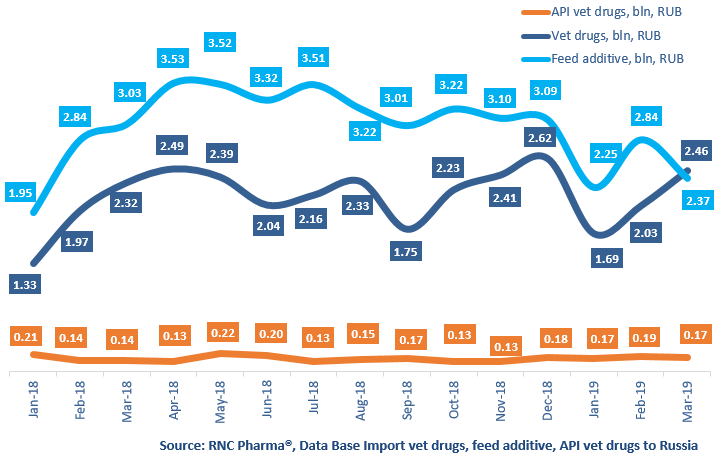