43% of doctors prefer to prescribe original drugs, according to an online survey by the RNC Pharma analyst company and the Doktor Na Rabote (Doctor at Work) social media service for doctors. At the same time, only 16% have personally encountered low quality alternatives, and another 27% resort to generics only when dealing with simple cases. It is difficult to say what kind of motivation those 27% have; it may be the conservatism that is natural for medical specialists, as well as general distrust of the Russian healthcare system, in particular of healthcare provision.

33% of the respondents somewhat agree to use generics, and 11% of them take into account the patient’s financial situation when deciding between the generic and the original drug (in the outpatient segment, since there is no choice in the public segment). At the same time, 18% do not see any difference between generics and original drugs in most cases, which is even higher than those who have encountered poor quality alternatives.

Another 4% believe that original drugs should only be used while there are no generics, which is the way health systems in developed countries (USA, Germany, etc.) function.

How do you feel about prescribing generic drugs? (single answer question) 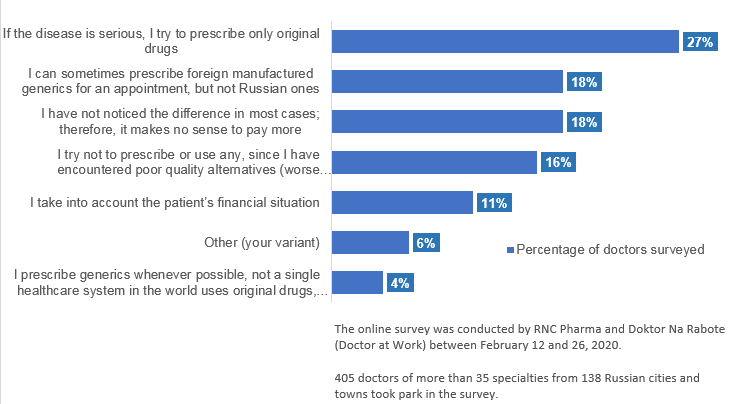