In 2020, the sales of veterinary drugs in the Russian retail market amounted to RUB 20.3 bln (retail prices, VAT included), which is in monetary terms (rubles) 0.2% lower than in 2019. The growth rate in physical terms (in minimum dosage units, MDU) is -3.4%, with the market volume of 191 bln MDUs.

Several factors at once affected the development of the veterinary market. First, the abnormal weather last spring and summer in a number of regions of Russia led to a noticeable reduction in demand for typical bestsellers, in particular for insectoacaricides and anthelmintics. Second, the coronavirus epidemic not only shifted the attention of consumers, but also seriously affected the income of the population, therefore limiting effective demand.

Of course, the global trends varied from region to region. For example, despite the general stagnation in demand, the growth rates in the Southern Federal District reached +9% in monetary and +10.5% in physical terms.

The three companies also have the highest growth rates in physical terms: Agrobioprom with +34%, Zoetis with +18%, and KRKA with +12%. Boehringer Ingelheim is also worth mentioning, with its +12%. The sales of the company’s tetracycline antibacterial drug Ronaxan, used for the treatment of infections in cats and dogs, have grown by 54%. 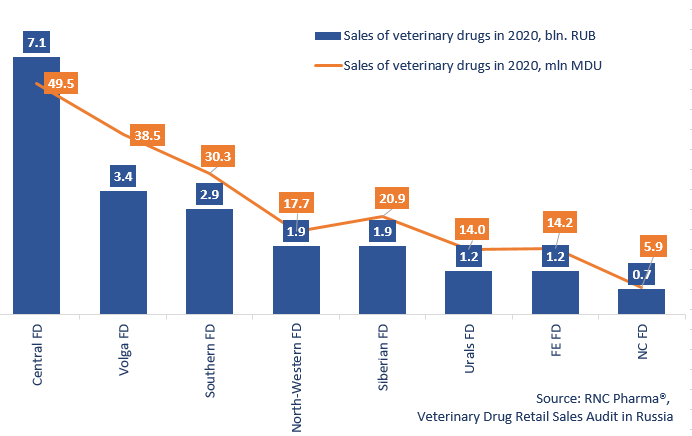